Prince William and Prince George are getting good at this father-son matching thing.

The blue romper with cream frill and gold buttons was worn by William for his balcony debut in 1984 when he was almost the exact same age as George. (Royal mom Princess Kate was also in a complementary look with a blue-and-white Catherine Walker coat dress.)

As George waved from above, the crowds below were thrilled for a glimpse of the little prince. 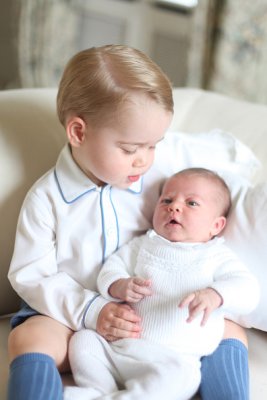 Princess Charlotte 'Does Sleep Through the Night,' Says Prince Charles
Next Up: Editor's Pick