You may not be a fan of the economic policy coming out of gridlocked Washington, but at least we’re not Zimbabwe!

For the past twenty years, the African nation has been under the spell of rampant hyperinflation, which was brought on by a combination of factors.

First, severe droughts hit the country’s agricultural sector hard, and then forced reallocation of land gave control of that sector from experienced operators of large farms to inexperienced subsistence farmers, further dragging down output. Finally, the government continued to print and spend money on things such as pension payments for civil war veterans, and to fund the country’s involvement in the neighboring Congo’s civil war.

These moves plunged Zimbabwe into an economic crisis leading to hyperinflation, which at its height ran at an estimated 8.8 million percent per year.

Now the country has decided to pull the plug on its virtually worthless currency altogether, with the central bank announcing Thursday that it would let citizens exchange its currency for dollars at a rate of 35 quadrillion to $1, according to a report in Reuters.

Zimbabweans hope that this move will finally put an end to its monetary woes, which at one point got so bad that the government was printing 100 trillion dollar bills that couldn’t even cover the cost of a week’s worth of public bus fares. 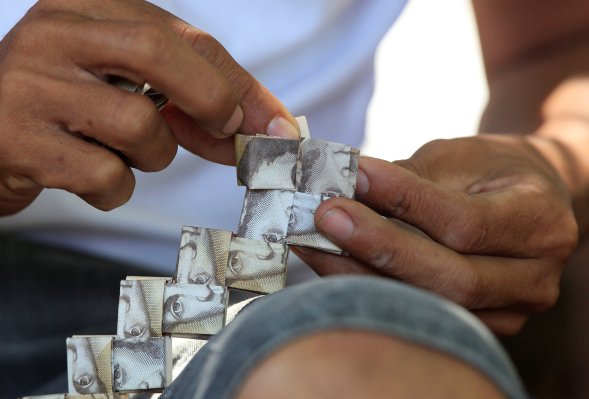 Why Venezuelan Migrants Are Making Handbags Out of Worthless Banknotes
Next Up: Editor's Pick