Everything You Need to Know About the 'Transracial' NAACP Activist

NAACP activist Rachel Dolezal is under fire after her parents claimed this week that she has long misrepresented herself as black.

Dolezal, 37, has been a key player in the Washington state and Idaho civil rights communities, and currently serves as president of the Spokane, Wash. chapter of the NAACP, where she was credited with reinvigorating the organization. She also chairs the city’s Office of Police Ombudsman Commission, teaches part-time in the Africana Studies Program at Eastern Washington University, and previously served as the education director for the Human Rights Education Institute in Coeur d’Alene, Idaho.

But as her parents spoke out about what they said was a years-long deception—telling The Spokeman-Review that Dolezal is white, but had been pretending to be black for years—other details about Dolezal’s past emerged, raising questions about everything from a scholarship she received to her current role on the Spokane commission. Repeated attempts to reach Dolezal were unsuccessful on Friday.

Here’s everything we know so far about Rachel Dolezal:

Dolezal’s parents say she is not black

Ruthanne and Lawrence Dolezal, who live in northwest Montana, told a Spokane newspaper this week that Rachel began to “disguise herself” as a black woman in 2006 or 2007, but that she is of Czech, Swedish and German descent, with “faint traces” of Native American heritage. Dolezal subsequently said in an interview with the Coeur d’Alene Press that she was African-American, adding, “They can DNA test me if they want to,” and, “I would caution you on all of this. This is ridiculous.” Dolezal’s parents provided what they say is her birth certificate to the Washington Post soon after—it lists Rachel Dolezal as their biological offspring. They have also released photos of a girl they say is a young Dolezal, showing her with pale skin, freckles and straight, blonde hair.

When Dolezal was a teenager, her parents adopted four young children, at least two of whom are reportedly black. Ruthanne Dolezal says that the adoption fueled Dolezal’s interest in “being involved with people of color.”

Dolezal has previously identified her youngest adopted brother, 21-year-old Izaiah, as her “oldest son” on social media. She recently clarified to the Coeur d’Alene Press: “He used to be my brother, but I have full custody of him now.” Ruthanne Dolezal said that Rachel obtained custody of Izaiah by alleging abuse in her parents’ household—at which point her parents and two of her adopted brothers ceased contact with her.

These adopted brothers, Zach and Ezra Dolezal, also confirmed to the Washington Post that Rachel is white. Ezra, 22, who identifies as “25 percent black,” likened his sister’s claims of African-American heritage to blackface.

In an interview with BuzzFeed, Ezra said that Dolezal told him, “‘Over here, I’m going to be considered black, and I have a black father. Don’t blow my cover.’” He believes her fabricated identity is the result of her experiences at Howard University. “She used to tell us that teachers treated her differently than other people and a lot of them acted like they didn’t want her there…[that made her] hateful to white people.”

Dolezal received a full scholarship to a historically black university

Dolezal received her bachelor’s degree from Bellhaven University, a private Christian liberal arts university in Jackson, Miss. where her father told the Washington Post she was heavily involved in Voice of Calgary, a “racial reconciliation community development project where blacks and whites lived together.” She then went on to pursue a Master of Fine Arts at Howard University, a top-ranking historically black university in Washington, D.C., where Dolezal developed a particular interest in African-American portraiture. Her father told the Post that the university “took her for a black woman” in issuing her a full scholarship.

Dolezal has made numerous reports of hate crimes

The Spokane police released files this week on reports of hate mail that Dolezal reported earlier this year, including a package Dolezal received in late February that had neither a stamp nor a barcode on it, suggesting that it had been put there by someone with a key to the post office box. Dolezal was given a key when she became NAACP president, but when asked about the possibility that she had planted the package by the The Spokeman-Review, she responded strongly. “That’s such bulls—,” she said.

The hate mail inspired Spokane community members to hold a rally in support of Dolezal in March, according to reports.

Dolezal is accused of misrepresenting her race on an application

The city of Spokane is looking into whether Dolezal was dishonest about her race when applying to the Office of Police Ombudsman Commission, which she now chairs. Dolezal said she listed her ethnicity as white, American Indian and black on the application. Spokane’s Mayor, David Condon, says that the City Council is looking into whether any city policies have been violated.

This is how Dolezal is responding to questions about her race

In response to those who are asking about her race in the wake of her parents’ statement, Dolezal has said the question is “not as easy as it seems,” and that “there’s a lot of complexities” to the “multi-layered issue.” Perhaps her most decisive statement on her background is: “We’re all from the African continent.”

Dolezal plans to address the controversy Monday, according to a message she sent to NAACP members. “As you probably know by now, there are questions and assumptions swirling in national and global news about my family, my race, my credibility, and the NAACP,” Dolezal wrote. “I have discussed the situation, including personal matters, with the executive committee. I support their decision to wait until Monday to make a statement. The executive team asked that I also release my response statement at the same time, which will be during the 7-9 p.m. CT monthly membership meeting.” 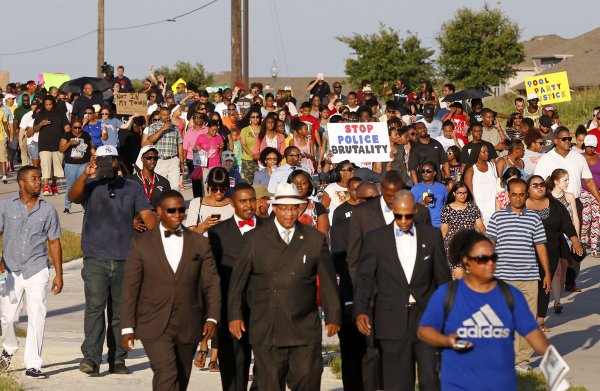