A few days ago, Zoe Saldana said her husband, Italian artist Marco Perego, had taken her last name — and that news apparently caused a bit of a stir. Jimmy Kimmel brought this up Thursday night when the actress stopped by his show — and she quickly shut down his sexist questions.

“He took your last name – did you make him do that?” Kimmel asked.

“No! Oh my God!” Saldana responded. “Why does it mean that a woman has to hold a gun, like, ‘You’re gonna be Saldana!'”

The actress also clarified that she and her husband actually took each other’s names. She became Zoe Saldana-Perego and he became Marco Perego-Saldana. And a few days ago, Saldana wrote a lengthy Facebook post, urging us all to let go “of some of the limitations we have inherited from the past, and forge a new path moving forward.” 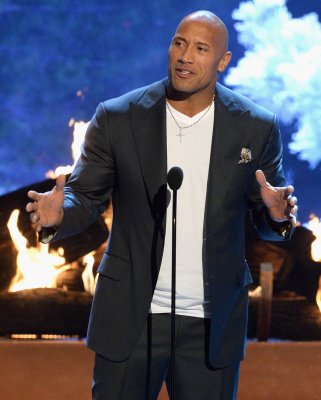 Watch The Rock Be Totally Adorable With a 2-Year-Old Girl on a Film Set
Next Up: Editor's Pick