Why George Clooney is Supporting Coffee Farming in South Sudan

When it comes to celebrities and their causes, there is perhaps no more indelible pairing than George Clooney and the nation of South Sudan. After decades of conflict and a genocide that left 2.5 million dead in the East African nation of Sudan, Clooney turned the light of his celebrity on the issue, rallying international support for a long promised referendum on independence for the southern part of the country, that, on January 9, 2011, gave birth to South Sudan. But an 18-month-long civil war, fueled in part by disputes over the new country’s lucrative oil fields, threatens to turn the world’s youngest nation into its latest failed state. On 10 June the Red Cross issued an urgent appeal, warning that 4.6 million South Sudanese were facing “severe food insecurity,” and that in some of the worst afflicted areas people were reduced to eating water lilies to survive. Clooney, who on the eve of South Sudan’s independence cautioned that the early years in the new country were likely to be chaotic, also laid the groundwork for an alternate future that is slowly starting to bear fruit – literally.

In the southwestern state of Central Equatoria, 300 farmers are tending to some 20,000 newly planted coffee trees in an ambitious attempt to reduce the importance of oil to the national economy by focusing on the sustainable export of coffee. And not just any coffee: Premium espresso beans destined for the aluminum capsules of Nespresso, the other name indelibly associated with Clooney. Associated internationally at least — American fans may not be aware he is the brand’s spokesman everywhere else in the world.

At the nexus of celebrity, cause and commerce, Nespresso’s South Sudan project aims to build the coffee industry from the ground up, by planting trees, training farmers in sustainable growing practices, and helping locals set up basic processing mills and sales cooperatives. They have invested $750,000 so far through TechnoServe, a nonprofit development organization that seeks to solve poverty through creating local business. If the pilot project goes well, Nespresso anticipates investing a total of $2.1 million through 2016 and creating a market big enough for some 15,000 coffee farmers. Already the signs are good. In 2013, South Sudanese farmers sent 1.8 metric tons of unroasted coffee beans to Nespresso in Switzerland. It was the country’s first ever non-oil export to Europe, and though the amount was small, the reception was ecstatic.

Like wine, good coffee comes from specific terroirs — climatic and soil conditions that create a distinct flavor profile. The signature aroma of a good South Sudanese coffee, according to Nespresso’s coffee experts, is of “cereals and plum.” Coffee originates from Africa’s Rift Valley, and the area now known as South Sudan was once known for coffee that was exported across the Middle East centuries ago. But decades of war, and a growing reliance on oil exports, saw the industry decline long before South Sudan became independent.

As anyone who has ever walked into a Nespresso boutique knows, the brand stakes its prestige on carefully cultivated coffee terrorirs, from Columbia to Ethiopia and Brazil. Most of those coffee-producing nations have spent decades building up markets and a reputation for quality that transcends any particular purveyor, be it Starbucks, Illy or Intelligentsia. In South Sudan, Nespresso has an opportunity to stamp its name on an entirely new coffee origin. In doing so it is capitalizing on novelty, quality and the feel-good aspects of investing in a good cause that happens to be backed by an international celebrity. “George did introduce us to South Sudan because of his passion for the country. But even though he is influential, we wouldn’t be interested in the country but for the fact that it has exceptional coffee,” says Daniel Weston, Nespresso’s Director of Creating Shared Value, a position that focuses on developing the communities that provide Nespresso its raw materials.

Coffee, as a commodity sold around the world at fluctuating prices, is not lucrative on a small scale. But if farmers develop a niche product that can be sold at a premium, they have a chance of creating a worthwhile livelihood that sustains their communities while minimizing environmental impacts. That’s where TechnoServe, which has been working in coffee for nearly 50 years, comes in. In South Sudan, their agronomists have essentially elevated a local product from the coffee equivalent of table grapes to a distinct cultivar that stands on its own when passed through an espresso machine. The farmers can then sell those beans to Nespresso, or anyone else, at a 40% premium. “A small farmer working an acre of land can produce the best and most valuable coffee in the world,” says TechnoServe CEO William Warshauer, speaking on the sidelines of the World Economic Forum for Africa in Cape Town in early June. “We want the multinationals to make profits, and we want farmers to lift their families out of poverty. This project ticks both boxes.”

No one believes that coffee alone will pull South Sudan from the brink, least of all George Clooney. But it’s a start. “If there is to be lasting peace and prosperity in South Sudan, part of the equation will be a diversified economy and opportunities that benefit the people of the country,” says Clooney in a statement. “The investment by Nespresso and TechnoServe in South Sudan’s coffee sector, even while the conflict is ongoing, is providing much-needed income for hundreds of farmers and their families.” As with espresso, sometimes all that is needed is a quick shot to get things going. 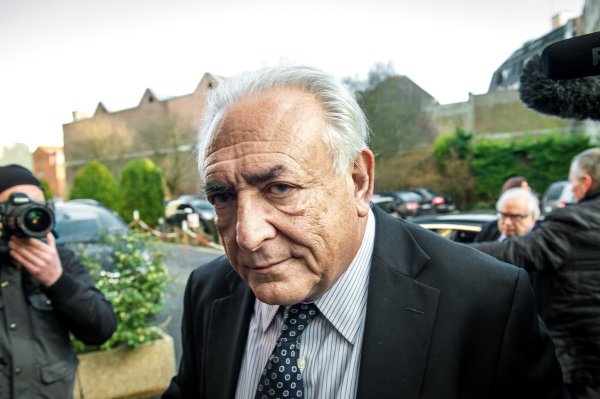 The Man Who Would Have Been France's President
Next Up: Editor's Pick