Miley Cyrus: 'You Can Just Be Whatever You Want to Be'

It doesn’t take much to summon a whirlwind of words from Miley Cyrus, who answers every question with a torrent. She darts from memories of football games in Nashville to pop star etiquette to how America is obsessed with sex—all so quickly that some words are hard to distinguish. (Except the profanity, which she uses at roughly the same rate teens use emoji.) Occasionally she slows, camping up her light Nashville drawl to mock the conservative politicians who are at odds with her new social-justice mission: teaching America that there’s more to gender than deciding someone is a girl or boy in the delivery room—and supporting people across the gender spectrum.

Cyrus counts herself among the people who don’t feel they fit in the traditional boxes, saying she doesn’t like the labels boy or girl or even gender fluid, though she’s settled on the latter for now. “I’m just equal. I’m just even. It has nothing to do with any parts of me or how I dress or how I look. It’s literally just how I feel,” Cyrus says during a break from taking pictures for Happy Hippie Presents #InstaPride in Los Angeles last month. The campaign is a collaboration between Happy Hippie—her non-profit dedicated to helping homeless and LGBT youth—and Instagram, aimed at spreading positive images of gender-nonconforming people and the families who love them.

Cyrus, wearing a yellow jumpsuit that hugs no curves and shows little skin, is talking about how she’s been sexually open for years and felt androgynous long before she heard the phrase gender fluid. She says she was the person other sexually curious teenage girls came to in Nashville: “They all wanted to experiment. I was always the one.” Now, when she does arrive somewhere wearing little but pasties and butterfly wings, she knows there will be critics who shame her for having her “tits out,” as she puts it. But she says she keeps doing it to challenge people: “I’m using it as a power stance,” she says. “It’s funny to see people try to look me in the eye.”

Like a college student exploring gender and sexuality in a very public seminar, Cyrus is combing back over the experiences of her youth in search of new kinds of understanding. Many of the people she’s photographing at the #InstaPride shoot have been on long journeys to find themselves, too. Greta Martela came out as a transgender woman late in life while living as a 44-year-old single dad. Tyler Ford, a close friend of Ariana Grande who grew up with the star in Boca Raton, came out as a transgender man before they (Ford’s preferred pronoun) stopped taking testosterone and started identifying as agender—meaning they feel they have no gender at all.

“People try to make everyone something,” Cyrus says. “You can just be whatever you want to be.”

She’s familiar with the feeling of people trying to make her something she’s not. Before she was smoking weed, dropping F-bombs and decorating her private parts with paint and ribbons for Paper magazine, she became famous as a child star on the Disney Channel series Hannah Montana. Back then, her fans were scandalized when Annie Leibovitz took a picture of her with her back exposed; Cyrus, then 15, said she was “embarrassed” by the picture and apologized. She was a young girl reporting to a bunch of old men in suits who told her how a budding pop star needed to look and act. Cyrus recalls coming back from one Hannah Montana summer hiatus with braces on. “I had to take them off immediately because of the way I looked,” she says. “If I was me now, I would have been like, ‘F— you. Normal 14-year-olds have braces. I’m going to have braces on the show, so kids who have braces in real life know that’s okay.’ But I didn’t have that in my mind then. I was coming from Nashville. My grandma’s a beauty queen. I didn’t know.”

Now 22, Cyrus isn’t worried about offending anyone. “Someone said the other day to me, ‘Should you ask your advisor?’” she says. “I’m like, ‘If I have an advisor, they should have been fired two years ago.’” And when Cyrus does offend someone, she doesn’t jump to apologize. Bristol Palin, daughter of former Alaska Gov. Sarah Palin and onetime Dancing With the Stars contestant, lashed out at Cyrus on her blog in a post titled, “Miley Cyrus Claims She’s ‘Least Judgmental Person Ever,’ Calls Christians ‘Insane Motherf—ers.'” Palin took issue with comments included in the Paper magazine interview, accusing Cyrus of being open-minded only toward people who think like her. But Cyrus says that isn’t true.

“Happy Hippie and what I’m about is all about acceptance. That isn’t what I meant at all,” she says. “You say what you say, and I meant it, but it wasn’t necessarily my full thought.” She says there will always be critics, giving the example of Caitlyn Jenner coming out as transgender. Though it was widely praised, a smaller contingency criticized how the Vanity Fair cover shoot perpetuated cisgender standards of beauty. “You can’t make every single person agree with what you say,” Cyrus says. “You got to just say your truth.”

That’s what Cyrus is doing now, in opening up about how she’s had past relationships with both men and women—and about having a future that could involve a husband or wife or perhaps being a single mom by choice. She’s also reflecting on how dissatisfied she felt in past romances, especially with the expectations for how men and women are supposed to act.

With guys, Cyrus says, there was an “overly macho energy” that she didn’t like. “That made me feel like I had to be a femme-bot, which I’m not. And then when I was with a girl, I felt like, ‘Oh s—, she’s going to need someone to protect her, so I’m going to need to have this macho energy.’ And that didn’t feel right either.” Cyrus says she sat in a restaurant with her male date last Valentine’s Day and started crying, looking at the older heterosexual couples around her. “All the women in the restaurant were with these older, fat men that had just let themselves go. They were just being drunk bastards. And then the women were sitting there, trying so hard just to look good. And they’re ignoring them the whole time. And I thought, ‘I’m not living like this,’” she says. “If I end up in a straight relationship, that’s fine—but I’m not going to be with f—ing slob guys who are watching porn, making all their girls feel ugly.”

She traces her fluid feelings about relationships and gender back to her own parents, country singer Billy Ray Cyrus and producer Tish Cyrus. “I don’t associate men and protection necessarily,” Cyrus says. “I think that’s what’s given me the openness of sexuality. Not that my dad wasn’t an awesome protector, but I trust my mom to save me. She’s the prince. I never had that fairy tale.” She recalls crying before dates as a teenager, stressed about people noticing flaws like a pimple. Now she says she’s much less concerned with the superficial stuff. “F—ing is easy. You can find someone to f— in five seconds,” she says. “We want to find someone we can talk to. And be ourselves with. That’s fairly slim pickings.”

Social media can still make her cringe and doubt herself, a feeling with which most young women will likely identify. “Every time you post a new photo, you might get 3,000 amazing things and then you get one s—-y one and it damages you,” she says. “I’ll do the same thing. I’ll post my art and everyone can say it’s great. And then some motherf—er says one thing and you’re like, ‘Well, maybe I am s—-y.’ It sticks in your head.” Cyrus sees girls making duck-faces to get likes on social media and wants to put other examples out there, for an audience that includes her younger teenage sister. “It’s so bad. You look at Instagram and you think, ‘Oh, I don’t look that way.’ And it makes you feel like s—. You start scrolling and you see all these people you’ll never be like and they have so many followers and so many friends,” she says. Hence the #InstaPride campaign: “That’s why we want to do it through Instagram—enough of these pictures. Let’s get some likes on some real pictures.”

Cyrus is bent on helping other people be confident in themselves, sometimes reaching out to individual fans through Twitter. One girl who took a cue from Cyrus was reprimanded for wearing a “Legalize Gay” shirt to school, so Cyrus contacted the school and sent the girl that T-shirt in every available color. Still, she says she feels some uncertainty for telling young people to be themselves, because she knows it’s not as easy for everyone as it is for her now—that a transgender kid who comes out to their parents may well end up on the street. “I hope more kids don’t do what I did and sit in their room and cry, thinking ‘I just don’t know what I’m supposed to be,’” she says. “But when I tell kids sometimes, ‘Just be yourself,’ I feel like, ‘I hope you can do that. Can you really do that?’”

Cyrus seems drawn to the LGBT community in part of the solidarity that’s abundant there. She recently went to the finals of RuPaul’s Drag Race, but says she’s not particularly interested in attending award shows—even if they’re a good opportunity to send a once-homeless youth on stage to give A-listers a homily. She responds better to the unbridled, flamboyant support that RuPaul’s contestants gave one another as they performed. “Beyonce would never be down in the front row cheering on Katy Perry,” she says. Perhaps because unlike people who are in the throes of coming out, pop stars often have to pretend to be something they’re not. That’s not something Cyrus is willing to do anymore—even if she’s still figuring out who she is.

“Maybe if you’re finally getting to be yourself, it’s more of a celebration,” she says, surrounded by new gender-nonconforming friends at the shoot in Hollywood. “Like, you are living your f—ing life.”

Read next: Exclusive: Inside Miley Cyrus’ Photo Shoot With People Across the Gender Spectrum 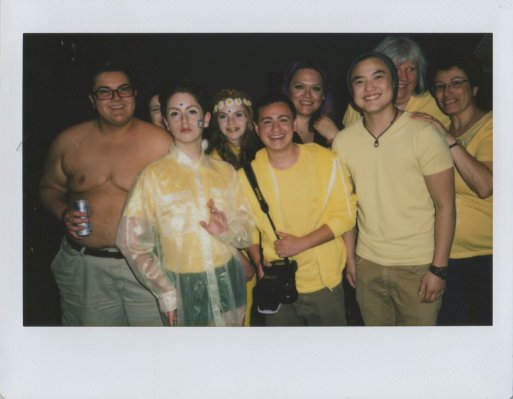 Exclusive: Inside Miley Cyrus' Photo Shoot With People Across the Gender Spectrum
Next Up: Editor's Pick