The Problem With TV’s Golden Age

There is more TV than there is life. This was true even in the days of three channels, rabbit ears and test patterns. But at least then most of it was filler: talk shows, reruns, old movies. It was easy enough to edit this into a manageable subset of “your shows” and complain that most of the time, nothing was on.

This year, the FX channel research department dug up a statistic that is wonderful or horrible, depending on the extent of your leisure time and the comfiness of your couch: there were over 350 scripted series on broadcast, cable and stream last season.

Let’s do the math. Say the average length of a TV season is 10 hours. (That’s short for a drama, long for a comedy.) That’s 3,520 hours of programming, or over 146 days to watch in all–assuming you hook up an IV drip, pop 5-Hour Energy and forgo news, reality shows, talk shows, movies, sports, commercials, meals, your kids’ graduations and the touch of a lover. (Well, unless you multitask.)

Much of it too is filler, but more than ever is great. Today’s second-tier shows would rank among the better, more ambitious ones of, say, 1985. On top of which, we’re even getting new versions of old shows: more X-Files, more Twin Peaks–God help us, more Full House. And miniseries. And imports. Amazon streams original series, and Overstock.com plans to. TV has come full circle: Once shows existed to advertise department stores. Now department stores exist to create shows.

For a TV critic, keeping up is a challenge, but I at least can do it on company time. For people with actual productive jobs, those unwatched seasons of The Wire join the seven-volume Remembrance of Things Past on the list of “cultural experiences I will totally get around to when my brain has been housed in an immortal robot body.” Pope Francis recently disclosed that he hasn’t watched TV in 25 years. Is it any wonder Pope Benedict retired? How else was he supposed to catch up on Breaking Bad?

Ah, but at least it’s summer-rerun season, right? No more! This season alone brings us a new True Detective and a Walking Dead sequel, while Netflix is issuing series like a vindictive teacher assigning vacation reading. Here are 12 episodes of Sense8! Be sure to get through them before the 13 of Orange Is the New Black next week!

When I talk to nonprofessional TV-watching friends lately, I sense that they could use not so much a summer-rerun season as a summer-TV cease-fire: a few months when no one programs anything and you can finally catch up. There are those Sunday-night shows you missed because you had to watch Mad Men live. You never got around to The Americans but kept hearing it was good. (Bad news: it’s terrific. And it’s on Amazon.)

You can blame not just the TV business but its technology. The shows you miss today no longer vanish. They pile up on Hulu, on iTunes and on your DVR, which is like a reverse time machine: it freezes time for your media but not for you, accruing obligations without creating more hours in the day to fulfill them. TiVo recently announced the $5,000 Mega, a DVR with room to record three years of shows. It’s less a machine than a conceptual-art commentary on the futility of existence.

Yet TV is now only part of our larger media glut. Americans spend over nine hours a day on screens, most of that on computers and mobile devices. And those are now increasingly dedicated to delivering video, uploaded by friends, clipped from late-night shows, shared by your uncle on Facebook. “You’ll Be Amazed What Happened Next,” cry the links, or “… And It Was Perfect,” or simply “WATCH.” So you do watch–who wants to miss out on amazement, on perfection? We carry in our pockets tiny rectangular holes into which it is possible to fall forever and ever.

I say all this not as a TV hater but as a TV lover. We have access to greater, more varied stories than ever, and to the great stories of the past. But the golden age is also a Midas age, with the paralyzing promise of riches everywhere you touch. To enjoy any of it, you must acknowledge that you will never be able to enjoy all of it. Even a videophile sometimes needs to say a little prayer: God, grant me the serenity to accept the TV I can’t see, the wisdom to know the TV I must see and the courage to change the channel. 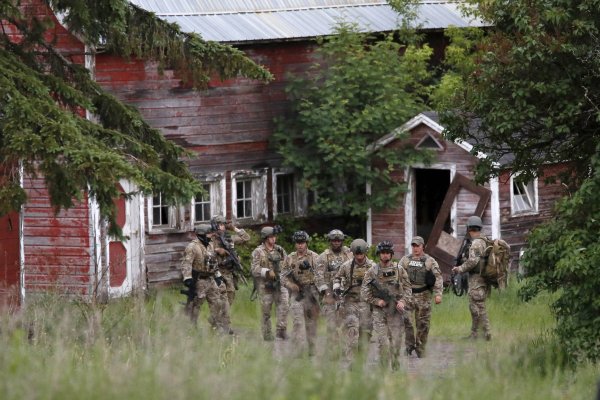 A Jailbreak Shows Prisons Are Only as Strong as the People Who Staff Them
Next Up: Editor's Pick