Chris Pratt as Owen in a scene from Universal Pictures' Jurassic World.
Universal
By John Anderson

Sound is an underappreciated element at the movies, even a special-effects-driven spectacle like Jurassic World. Yes, the franchise’s latest model of genetically manipulated dinosaur has the necessary résumé–“Bigger. Louder. More teeth,” as someone says–to seize an audience by its nerve endings. The jump-scare tactics of director Colin Trevorrow may cause heart palpitations among more delicate viewers. But what seals the deal is crunch–the one that accompanies a movie extra’s transition from theme-park attendee to Dino Chow. Never underestimate the value of audio, even in a supremely visual movie.

The snap, crackle and pop of Jurassic World are part of a technically virtuosic production, which is what one might expect when a film has been gestating for approximately 13 years. Starring Chris Pratt, Bryce Dallas Howard and Vincent D’Onofrio, it’s also supremely clever, computer-driven and as calculating as the corporate types running the titular theme park. On Isla Nublar, where Michael Crichton set his original Jurassic Park and Steven Spielberg his 1993 blockbuster, Jurassic World isn’t drawing the way it used to. “No one’s impressed by a dinosaur anymore,” laments Claire (Howard), the cartoonishly careerist park manager who never loses her composure or her high heels–even during her most frantic face-offs with the most fearsome beasts. The upside, Claire notes, is that with each new attraction introduced at Jurassic World, attendance has spiked. So new attractions have become the main business of on-site geneticist Dr. Henry Wu (BD Wong), who has allowed his ambition to outpace his judgment. His latest creation can reason, plan and kill for sport and seems impervious to conventional weapons. “You wanted scarier,” Wu says, rather cold-bloodedly, to panicked park financier Simon Masrani (Irrfan Khan). “Cooler, I think, was the word you used in your memo.” The monster is definitely cooler. And definitely a monster.

When it was released in 1993, the original Jurassic Park did not become another Star Wars, exactly–it lacked the organic mythology to spawn that kind of cult. But it did define what movies had become and where they would go. It arrived, coincidentally, at the same time that American indie films were busy blooming in the petri dish of Sundance. Something had to give. And it did: Serious drama began a 20-year migration to television. Spectacle stayed at the movies.

But Jurassic World represents something more than the hopes of the theatrical film industry at a time when its cultural relevance seems to be on life support. The movie is also, to its credit, a critique of current popular culture–even if much of that critique is self-serving. The science geeks in charge of running Jurassic World, a combination SeaWorld and circus, bemoan the fact that the naming rights to new dinosaurs are being sold to corporate sponsors–even as those sponsors get shameless product placement throughout the movie. (Do park employees really drink that much branded coffee? No wonder they’re edgy.) The idea that Americans will get bored with anything, even resurrected dinosaurs, is certainly a trenchant one–and more than a little ironic in a movie that presumes to have a public with a lower attention span than ever before. “What do you want?” Claire asks a team of potential JW sponsors. “We want to be thrilled,” one says. “Don’t we all,” she answers.

So we do. And on that front, Jurassic World delivers: The action sequences succeed in transporting one out of the theater and into a landscape of savagery and survival, into an “amusement park” where 20,000 people have suddenly become snack food for new versions of 65 million-year-old predators. Of course, it’s hard to care about a faceless mass, so director Trevorrow gives us faces: Claire’s neglected nephews Zach and Gray (Nick Robinson and Ty Simpkins), who provide the imperiled-youth aspect essential to every JP film (that their parents are divorcing is a subplot that’s introduced and promptly abandoned); malefactor Hoskins (D’Onofrio), who is angling to secure a military contract for the park’s customized animals (another plotline to nowhere); and the principal hero, Owen (Pratt), the raptor whisperer who knows exactly what’s going to go wrong and what to do, and who is portrayed with both predictable charm and unexpected authority. Those who know Pratt from Parks and Recreation or Guardians of the Galaxy will be surprised by the way he inhabits the action-hero persona while making it, and the movie, pretty much his own. Despite the 70-foot competition.

To some degree, Spielberg movies are always about movies. He serves as executive producer on Jurassic World, but director Trevorrow (Safety Not Guaranteed) has picked up the cue, and it’s curious how, in a film positioned as state-of-the-art, so much old-fashioned dramatic technique still provides the thrust. The dinosaurs are fearsome when one sees them–but not seeing them is often worse. Howard’s Fay Wray–ishness cannot be ignored. A pterodactyl attack is straight out of Hitchcock’s The Birds. When the big, evil, wounded Indominus rex–yes, that’s what it’s called–is being hunted by a pitifully overmatched Jurassic World security force, one member looks down as he makes his way cautiously though the underbrush and suddenly sees blood dripping onto his wrist from … somewhere … above.

We know what it means. And even if it’s been done a million times, it works. That, and the crunch. 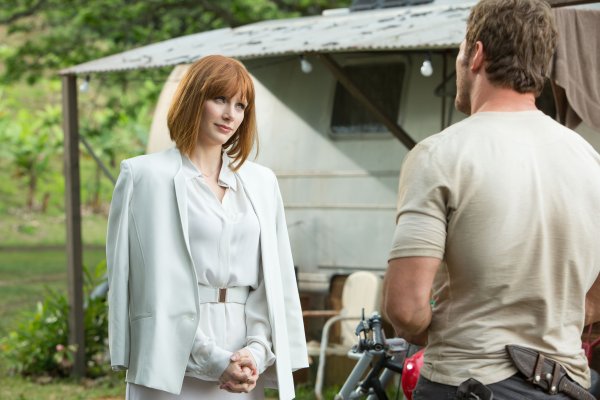 Watch Bryce Dallas Howard Do Her Jurassic World Scream
Next Up: Editor's Pick