Shortly after Burma’s democracy icon Aung San Suu Kyi was released from her most recent bout of house arrest in 2010, she fielded a surprise visitor at the party headquarters of her opposition National League for Democracy (NLD). According to a senior NLD figure who was present at the meeting, the well-wisher was none other than a Chinese diplomatic envoy to Myanmar, as Burma is officially known. “China realized the Lady is powerful, and they wanted to curry favor,” he recalled, referring to Suu Kyi by her feminine sobriquet. “The Chinese, they know how to do this foreign policy business very well indeed.”

On June 10, Suu Kyi landed in Beijing, her first visit to Burma’s largest and most influential neighbor. Although the schedule of her five-day visit has been kept closely guarded, NLD associates say she will also visit Shanghai and Yunnan province, which is on China’s border with Burma’s conflict-ridden northern flank. On the afternoon of June 11, Suu Kyi met with China’s President Xi Jinping and is also scheduled to meet with Premier Li Keqiang, according to the NLD. (Earlier on Thursday she also convened with China’s foreign policy-focused state councilor Yang Jiechi.) That is the kind of all-star line-up usually reserved for major national leaders, not opposition party figures.

But Suu Kyi is no ordinary opposition figure. Although she is constitutionally barred from the Burmese presidency because of rules that seem to have been designed specifically with her in mind, her NLD is expected to prevail in national elections in November. The polls are part of a quasi-democratic transition envisaged by Burma’s military leaders, who still control many levers of power, even if some have shed their army uniforms.

During the long years when Burma languished as a pariah state, shunned by the West because of its appalling human-rights record, China provided financial and moral support. Today, China is still the largest foreign investor in Burma. But its once preeminent position has been challenged as other nations shed sanctions on the regime (and its cronies) and consider doing business in one of the world’s last economic frontiers. Notably, U.S. President Barack Obama has visited Burma twice, and his Administration has held up the country’s reforms as a foreign policy triumph, even as ethnic violence has marred the feel-good narrative.

Burma boasts a treasure trove of natural resources, from jade and hydropower to natural gas and timber. An illegal bounty of opium and other drugs is also primed for export. But China’s involvement in two major projects — the Myitsone Dam in northern Kachin state and the Letpadaung copper mine in central Burma — has rankled the Burmese public. The hydropower project is officially suspended while protests against the mine have been met by violent government intimidation. In 2013, Suu Kyi, who chaired a parliamentary commission investigating the mine project, met with rare local opposition when the panel’s report recommended the mine go ahead despite its social and environmental impact.

China-Burma relations have also been tested by armed conflict in northern Kachin and Shan states between ethnic rebels and the Burmese military, which has sent refugees and missiles across the two nations’ border. (Many of the ethnic minorities who live in northern Burma also have large populations in Yunnan province.) Earlier this year, several Chinese villagers living near the national demarcation were killed by what the Chinese government says was errant Burmese military shelling. While China has officially protested the killing of its citizens, the Burmese government’s reaction has not been fulsome. One Burmese government adviser, who is not authorized to speak to the media, speculates that this is because his bosses believe the Chinese military is providing financial support to some of the ethnic armies battling the Burmese.

On June 10, a Chinese Foreign Ministry spokesman called on Burma to answer “relevant requests put in by China, stop the warfare, ease the tension, and restore peace, stability and normal order to the China-Myanmar border area at an early date.” A day later, the official China Daily quoted a Chinese academic who blamed anti-Chinese sentiment in Burma on “lack of knowledge of China and distorted reports of some Western media.”

If Beijing is at all uncomfortable with extending a welcome to one of the world’s most famous democracy activists, the nation’s propaganda machine isn’t saying. (The visit is officially on the invitation of the Chinese Communist Party to the NLD.) In an editorial on Suu Kyi’s tour, China’s official Xinhua news agency offered a fig leaf: “China welcomes anyone with friendly intentions and it bears no grudge for past unpleasantness.”

Still, China Digital Times, which documents Chinese government censorship directives from its base in California, noted that Chinese media were instructed not to report on “the delegation from Myanmar visiting China.” Instead, state media would shape the official narrative on Suu Kyi’s visit. (On Thursday, Burma’s official New Light of Myanmar refrained from covering Suu Kyi’s China trip.)

Meanwhile, human-rights advocates wondered whether Suu Kyi would use her inaugural trip to China to comment on the plight of her fellow Nobel Peace Prize laureate Liu Xiaobo, who remains in a Chinese jail for his role in publishing a democracy manifesto. A poet and writer, Liu was sentenced to 11 years’ imprisonment in 2009 for inciting subversion of state power — a common tactic used to silence independent voices in China. But those hoping that Suu Kyi will speak out on behalf of Liu may be disappointed. In a worrying precedent, even as Buddhist persecution of ethnic Rohingya Muslims in western Burma has intensified, Burma’s democracy icon has largely stayed silent. 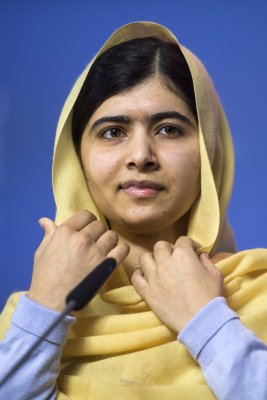