Buzz Aldrin: Why the U.S. Should Partner with China in Space

Ideas
By Buzz Aldrin
Dr. Buzz Aldrin served as lunar module pilot for Apollo 11, the first manned lunar landing mission. He is the author of eight books, including his New York Times best selling autobiography Magnificent Desolation. His newest book, Mission to Mars: My Vision for Space Exploration, was published in 2013. As one of the leading space exploration advocates, Buzz continues to chart a course for future space travel. He is an unpaid advisory board member for XCOR Space Expeditions.

I’d like to call attention to and expand upon several points recently raised by Jeffrey Kluger, editor at large for TIME magazine, in his first-rate article: “The Silly Reason the Chinese Aren’t Allowed on the Space Station.” Let me add my voice of support for the U.S. to initiate dialogue with China on the country’s inclusion in the International Space Station program. Doing so, however, requires not only White House leadership, but also bi-partisan support in Congress to roll back public law that bans NASA from engaging in bilateral agreements and coordination with China.

It’s all about “inclination.” In this case, I’m not just talking about the inclined orbit of an object circling Earth, but also a will to lean forward and encourage collaboration in space.

Working with China—as we’ve learned with other space powers—presents scientific gains and boosts safety factors for all those engaged in human spaceflight. But there is much more.

All 21st century spacefaring nations need to take stepping stones that lead to humanity’s bold leap to the Red Planet. For my part, I have spent considerable time orchestrating Cycling Pathways to Occupy Mars—by initiating government-private sustained human presence around Earth and the Moon, including design assistance of several lunar bases for all international and commercial uses as a prelude to human activity on Mars.

But back to orbiting olive branches between two space powers, the United States and China. Let’s put the symbolism aside for a minute regarding Chinese onboard the 15 nation-supported International Space Station.

The ISS is an orbiting test bed for scientific utility and sharpening our exploration knowhow. It is also an incubator for commercial development and free enterprise. Those activities will soon include U.S. government support to appraise a privately supplied expandable module. That technology is useful for establishing habitats elsewhere in low Earth orbit, at L-points in Earth-Moon locations, and even on the Moon itself. The U.S. can assist other nations to gain a foothold on the Moon, just as we did when Neil Armstrong and I made that “one small step” back in 1969.

China can, as other nations have already, reap rewards by using the ISS. There are many benefits to opening the airlocks on the ISS to accept visitors from China and other nations.

America would be taking the high road, not just offering cooperation but also assistance in making Earth orbit a busy place for commerce, transforming the Moon into a multi-nation beehive of activity, and tapping the global wherewithal and talent to venture outward to Mars.

The 40th anniversary of the Apollo-Soyuz “handshake in space” this July acts as a reflective moment on how two Cold War rivals— the U.S. and the Soviet Union—put aside their saber-rattling rhetoric to meet in space.

Perhaps that historic mission in July 1975 can help shape space cooperation with China—a means to facilitate China’s growth in becoming a responsible and respected member of the international community of spacefaring nations. It would welcome them, I feel, into the fellowship of nations that are doing things together in space, as well as right here on Earth.

But suppose U.S. leadership in promoting space cooperation with China is a no-show. Other nations are already stepping into this arena.

Specifically, the European Space Agency and China have blueprinted a cooperative work plan for space. ESA and the China Manned Space Agency signed a framework agreement in December 2014, reaffirming that partnership last month. The two sides have established working groups on space experiments and utilization, astronaut selection, training and flight, and space infrastructure of mutual interest to both organizations.

China is readying their Tiangong-2 space lab to be lofted around 2016. Once that facility is in Earth orbit, it will be followed by a piloted Shenzhou-11 spacecraft and first use of the Tianzhou cargo craft to rendezvous with and support lab operations. A core segment for a larger, multi-module space station is also on their agenda, to be placed in Earth orbit around 2018. That station is expected to be fully constructed around 2022. China is itself taking strides to make their orbiting outpost available to other countries.

It is time that America take stock in and re-examine our goals and objectives in space. Let us recommit to objectives that make the most sense. History does not make itself. But unfortunately it is not just made by actions … but also inaction.

I am resolute in my vision that Earth isn’t the only world for humanity anymore. The first humans on Mars will herald a remarkable milestone. Indeed, I’ve been a global envoy carrying a message: On the occasion of the 50th anniversary of Apollo 11’s touchdown on the Moon on July 20,1969, the U.S. president in 2019—she or he—can utter these words: “I believe this nation should commit itself, within two decades, to commencing an America-led, permanent presence on the planet Mars.”

America’s space program can be placed on a trajectory that spurs increased global space cooperation. The International Space Station is one tool that can be used for this prospect. Let’s all look beyond the here and now. By working collaboratively we can attain the vision and the will to reach for even larger goals … all the way to the distant dunes of Mars and beyond.

Buzz Aldrin, best known for his Apollo 11 moonwalk, holds a doctoral degree in astronautics and continues to wield influence as an international advocate of space science and planetary exploration. Aldrin and co-author, Leonard David, wrote Mission to Mars – My Vision for Space Exploration, published in 2013 by the National Geographic Society. 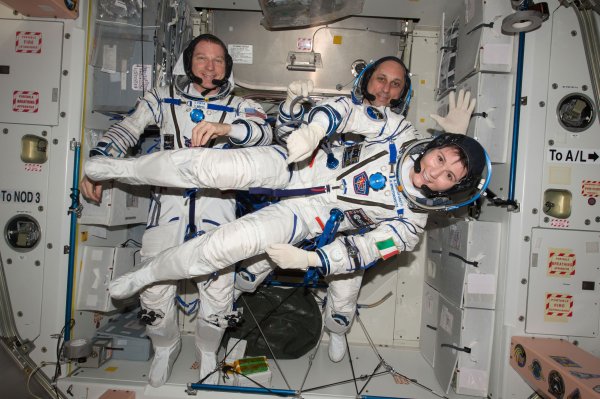