What Happens if the Supreme Court Rules Against Obamacare?

The Supreme Court could overturn a crucial piece of the Affordable Care Act this month.

If it rules against the Obama administration, the nation’s highest court could kill much-needed health insurance subsidies for people in the 34 states that don’t run their own online marketplaces.

But the real question isn’t what the court does, it’s what happens afterward in the White House, Capitol Hill and the statehouses.

The federal government currently provides $1.7 billion every month in tax subsidies to 6.4 million people in the 34 states that rely on the federal HealthCare.gov marketplace instead of running their own healthcare markets.

The court is considering whether a section of the law was incorrectly worded, which would make those subsidies unavailable to states without their own marketplaces, unless Congress or the states find a workaround.

So what would happen next? Here are three scenarios.

Neither the Obama Administration, Congress or the states does anything to reinstate subsidies after the Supreme Court ruling. Without the federal subsidies, people buying insurance in the 34 states without their own exchange see their monthly costs nearly triple, on average, according to the Kaiser Family Foundation. Unable to afford insurance, many people would drop their coverage, leaving a pool of sicker customers. Insurance companies are forced to raise their prices, forcing more people to drop and creating a so-called “death spiral” of higher rates and more uninsured people in the individual insurance market. It would disrupt the healthcare market outside of Obamacare, too.

“If no one did anything, the individual markets would blow up,” said Gary Claxton, vice president of the Kaiser Family Foundation who studies the Affordable Care Act.

The Republican-led Congress fixes the law, allowing residents of states without their own insurance marketplaces to continue receiving subsidies. This could be a short-term fix (until after the next presidential election) or a permanent fix. It could be part of a compromise which also changes another part of the law. However it’s done, the fix would allow the 6.4 million people to continue buying health insurance with the help of federal subsidies and the law would continue working as designed.

Many congressional Republicans are opposed, however.

Congress doesn’t act, but state governments do. In some states without their own marketplaces, governors and lawmakers move to create their own marketplace, designate the federal HealthCare.gov website as their state marketplace or partner with another state. In other states, politicians stand back and do nothing. This leads to a division in the U.S., with Obamacare working poorly in many red states that don’t have marketplaces and continuing to work in many blue states, similar to how the Medicaid expansion has worked.

President Obama said on Tuesday said his signature healthcare law is “part of the fabric of how we care for one another,” adding, “This is health care in America.” But the end of June, that would only be true in some states. 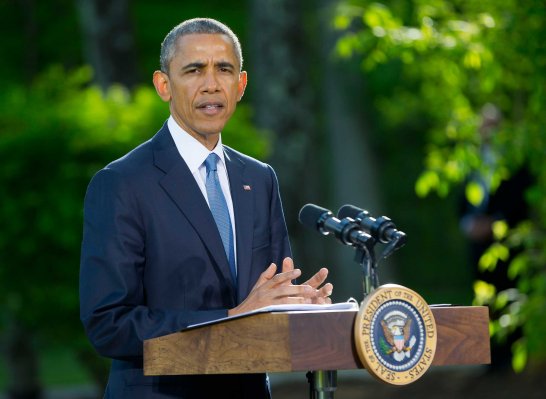 Why It Matters if Obama Smokes (and Why It Doesn't)
Next Up: Editor's Pick