How 4 Girls Escaped Boko Haram to End Up in Oregon

Nigerians holding candles during a vigil for the one year anniversary of the kidnapping of hundreds of Nigerian school girls in Chibok, Abuja, Nigeria on April 14, 2015.
EPA
By Charlotte Alter

Three girls who evaded the kidnappers and one who happened to be away from school at the time of the abduction have been relocated to Canyonville Christian Academy, an international boarding school in Canyonville, OR.

The four girls were classmates of the 219 girls still missing after they were kidnapped from their Chibok school last April by Islamist militant group Boko Haram. The group has abducted at least 2,000 women and girls since the beginning of 2014, Amnesty International reports, and many of them are being sold into slavery or sexually abused.

The girls spoke exclusively to Cosmopolitan about their capture, escape and experiences in America. Mercy escaped by jumped off a moving truck. Deborah refused to talk about her experience. Grace made a run for it after she asked her captors to go to the bathroom– she made it to a nearby house, where strangers lied to protect her from the militants who came looking for her. Sarah was away from school the night of the abduction.

Now in the United States, the girls are learning about Facebook, staplers, and Christmas trees — but counselors say they’re not quite ready for bathing suits.

The abduction of the Chibok schoolgirls became a global movement last year at least partly due to the ‘Bring Back Our Girls’ campaign, whose co-founder Obiageli Ezekwesili was recognized in TIME’s list of the 100 most influential people earlier this year. The former Nigeria education minister gave an impassioned speech at the TIME 100 Gala in April on the hunt for the kidnapped girls:

Correction: This article originally misidentified Obiageli Ezekwesili’s former role in the Nigerian government. She was minister for education, and before that minister for minerals. 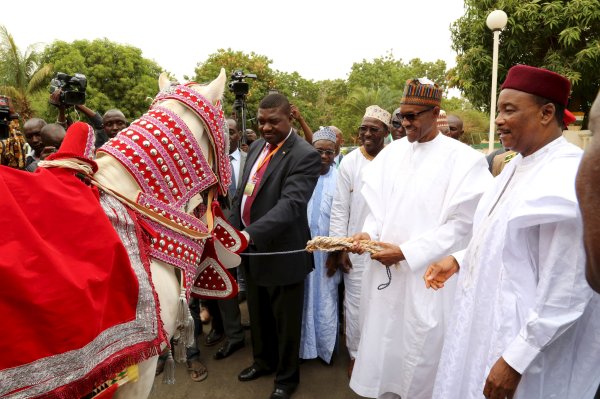