Young supporters of pro-Kurdish Peoples' Democratic Party (HDP) celebrate in the streets the results of the legislative election, in Diyarbakir on June 7, 2015.
Bulent Kilic—AFP/Getty Images
By Ian Bremmer

Follow the news these days, and it’s hard to be an optimist. Ukraine’s ceasefire is a fiction. ISIS is capturing new ground and drawing new followers. The U.S. and China seem at odds in the South China Sea. The Greeks sometimes seem determined to stumble their way out of Europe. The list goes on. But with the real exception of Ukraine, these risks are exaggerated, and there are positive stories out there that deserve more attention. Here are three:

Start with last weekend’s election results in Turkey. Not so long ago, this country was considered a major emerging market success story. That’s mainly because then-prime minister Recep Tayyip Erdogan had helped unlock much more of the country’s growth potential by empowering development and entrepreneurship in the country’s Anatolian heartland. Under his leadership, per capita income tripled in a decade.

Unfortunately, Erdogan, now president, has drawn comparisons with Russia’s Putin by shifting focus from economic gain to a bid for lasting political dominance. To corner his enemies and expand his power, he has compromised the independence of Turkey’s courts, police forces, and central bank. His foreign policy has become a mix of nationalist paranoia and anti-Western resentment. He has also polarized his country.

But Turkish voters reminded us on June 7 that Turkey is not Russia, and Erdogan can’t become Putin. His Justice and Development Party, known by its Turkish initials AKP, earned another victory, but not the supermajority Erdogan needed to rewrite Turkey’s constitution to give himself more power. In fact, for the first time in 13 years, the AKP didn’t even win a simple majority and will now have to form a coalition government.

Make no mistake: Turkey will be a mess for some time to come. Expected intensified political infighting over the next couple of years, but the big news is that there are still checks on Erdogan’s ambitions, even within his own party. It’s a step back for Erdogan–and a step forward for his country.

After years of corruption and stagnation, Africa’s largest economy needed new political energy. March’s presidential election provided exactly that. After 16 years of one-party rule following the country’s shift from military control to democracy in 1999, opposition leader Muhammadu Buhari won a clear victory and a strong mandate. The incumbent accepted defeat, and power changed hands peacefully. That’s crucial in a country where stability depends on a delicate political balance between Christians in the south, Muslims in the north and various ethnic groups and provincial factions.

With majorities for his APC party in parliament and governorships, Buhari brings energy for reform. A capable economic policy team is now settling into place. A badly needed revitalization of the oil sector is underway. Government spending restraint will earn greater investor confidence in Nigeria’s enormous potential. Buhari, a Muslim and former military commander, will more aggressively target Boko Haram, Muslim militants based in the country’s northeast, than his predecessor did.

Even in Europe, despite intense media focus on the risks of Grexit and Brexit—Greek and British exists from the E.U., respectively—there is cause for optimism. Last week, the Pew Research Center released a report detailing evidence of a revival of public faith in the broader European project. Pew surveyed 6,028 people in France, Germany, Italy, Poland, Spain and the UK, countries that make up 70% of the EU population and provide 74% of its GDP. Though many of those questioned still say their economies are in rotten shape and won’t quickly return to pre-crisis levels, they do sense improvement—and credit the European Union for it. Despite the rise of Euro-skeptic parties like Spain’s Podemos, Britain’s UK Independence Party and Germany’s Alternative für Deutschland, public support for the EU within these member states has actually risen since 2013. In Britain, support for exit from the EU trails support for continued membership by 55 to 36 percent. Interestingly, majorities in Spain (70%), Britain (66%), Italy (58%), and Germany (50%) say the rise of “non-traditional” parties is a “good thing,” perhaps because they provide a useful check on the power of European institutions.

There’s no doubt that Ukraine’s conflict will deepen, tensions with Russia will rise further, Greece has a long way to go and the Middle East will burn hotter for longer. But add reform momentum in India, Italy, and Mexico, and there are still plenty of good news stories beyond the headlines.

Most Popular on TIME
1
Yes, Texas Could Go Blue This Year
2
How Biden Outmaneuvered Trump On Climate
3
An Iconic Star Wars Character Just Showed Up in The Mandalorian 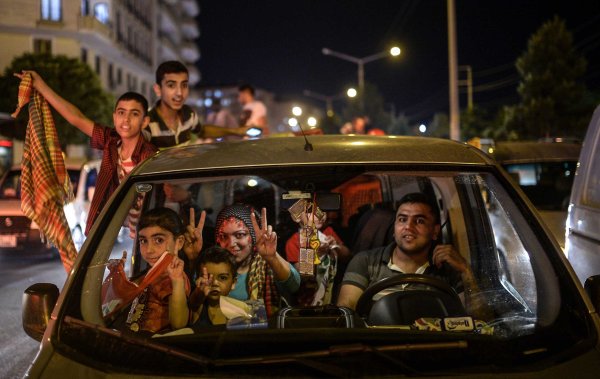 What Turkey Urgently Needs Now
Next Up: Editor's Pick