Streaming Showdown: Apple Music vs. Spotify vs. Pandora vs. Rdio

Back in 2001, Apple’s iPod “1000 songs in your pocket” ad campaign changed how the world thought about music. And over the 14 years that have passed since, high speed Internet and wireless data changed it again. These days, we have closer to zero songs in their pocket, because music streaming services let us listen to whatever we want on-demand from the cloud. But each streaming service hits its own set of high notes and low notes.

Here’s a comparison of the most popular subscription music services going:

When Apple’s new streaming music service launches on June 30, it could have a huge leg up on the competition because it will come pre-installed on millions of iPhones running the soon-to-be-released iOS 8.4 operating system. A medley of the former Beats Music paid subscription service and iTunes Radio, Apple’s free streaming offering, the $9.99-per-month Apple Music boasts more than 30 million tracks.

But the company knows a massive library isn’t enough if it wants to overtake competitors like Spotify. So the iPhone-maker bundled in some new features, as only it can. By unleashing Siri’s smarts on its library, Apple Music lets subscribers say things like, “Play the top songs from 1982,” and immediately get an earful of totally ‘80s tunes. Also, the Apple Music on-boarding process (which was a big part of Beats Music) is intuitive, quizzing users on their favorite genres and bands to get a feel for how to best customize its recommendations.

Still, nothing is better than the human touch. For that, Apple Music includes Beats 1, a worldwide streaming radio station with expertly selected tracks introducing people to great new artists. The company also boasts a new social feature that allows artists to share notes, photos, and other media with fans, directly in the app. Apple did something like this before with its Ping social music service, but it didn’t move the needle with fans or artists. So, like the entire offering, the jury is still out on this one until later this month for iOS and — get this — Android. One thing families will love is its group rate: $14.99 will cover six users in a household.

The reigning champion of the digital music world feature-wise, Spotify has more than 60 million active users in at least 58 countries, but only 15 million people pony up the $9.99 per month for the ad-free Premium service. Still, it’s those free users that stick in Apple’s craw, because they still get access to many of Spotify’s 30 million songs, only with ads interrupting the playback, among other restrictions.

Yet the big draw for many Spotify users is how refined the service has become since launching in 2008. As a platform hosting other apps on PCs, a digital jukebox on tablets, or a high-powered personal music library on mobile phones, Spotify delivers not only great tunes, but also an excellent user experience. And by integrating with Facebook early on, Spotify made it extremely easy for users to find their friends, letting them share their favorite albums, artists, playlists and tracks. Available on everything from Android to Windows to set-top boxes, Spotify has excellent reach not just with devices but also with demographics. Kids who have grown up listening to tracks on it are now turning their parents on to it as well. Thankfully, Spotify lets users double-, triple-, even quadruple-up on the bill by offering 50% off every account after the first. So, coincidentally, the cost for two household users is — you guessed it — $14.99.

With 80 million users, Pandora is currently the most popular streaming music service, but with Spotify and Apple Music on its heels, you have to wonder for how long. Pioneering data-driven personalized recommendations, the service was revolutionary when it launched in 2000. In the 15 years since, its seen the competition emulate its recommendation engine and surpass it in features offered. But name recognition alone keeps it awash in users, helping the free, ad-based side of the service continue to generate profit. Available everywhere from the Pebble smartwatch to the Ford Focus, Pandora has used its multi-year head start to gain ubiquity ahead of the competition.

But with far fewer songs in its library than Apple and Spotify, it works within its limitations. For instance, users can’t pull up just any song on demand; instead they can listen to a curated station based on an artist or song they enjoy. With the free service, users only get six skips an hour or 24 fast-forwards per day. Pandora One, the company’s $4.99 per month subscription offering, eliminates the ads and increases the amounts of skips a user gets, but continues to let stations automatically pause if they think you’re not listening, which can be a drag if you’re in a good radio groove.

Boasting the same 30 million-sized library as Spotify and Apple Music, Rdio takes a page out of all the competitors playbooks, offering free and a couple of paid tiers to provide plans to fit all its customers. The company’s free offering plays like Pandora, with ad supported radio stations based on artists, genres, moods, and more. Meanwhile, Rdio’s lowest cost plan, the $3.99 per month Rdio Select, cuts out the ads and the free service’s six-skips-per-hour limits. Or, for $9.99 per month, Rdio Unlimited delivers the on-demand perks that Spotify and Apple Music also promise: any track, or album, any time.

With desktop and mobile apps (including Android, iOS, and Windows Phone) Rdio’s reach competes with the other services very well. And with Facebook integration, it also has the social chops to help friends share music with each other. Unfortunately, these are all walled gardens, which means if you’re an Rdio user, you can’t share music with your Spotify-playing friends. Hopefully one day in the future, all these services will work in perfect harmony — but I wouldn’t bet on it. 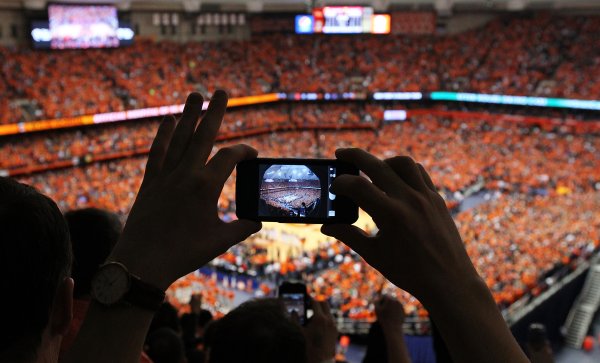 Photo Storage Showdown: Google Photos vs. Apple iCloud vs. Amazon Prime vs. Dropbox vs. Flickr
Next Up: Editor's Pick