US President Barack Obama addresses a press conference at Elmau Castle near Garmisch-Partenkirchen, southern Germany, at the end of a G7 summit, on June 8, 2015.
Mandel Ngan — AFp/Getty IMages
By Ian Bremmer

With each passing day, it seems the stakes climb higher in Greece’s game of chicken with Europe. What is Washington’s attitude toward all this? The U.S. needs a solid, stable E.U. to coordinate on foreign policy priorities like Russia, ISIS and the rise of China. The U.S. just wants the Greeks and the rest of Europe to work out their differences.

So what is Washington’s strategy? It seems to be an incoherent mix of what I call “Indispensable America” (the U.S. must lead), “Moneyball America” (target your strategy shrewdly), and “Independent America” (this problem is not OUR problem).

At the G7 press conference in Germany, President Obama was asked whether European governments were being too difficult on Greece. The President responded by nudging the Greeks: “It is going to require Greece being serious about making some important reforms.” Then he prodded everyone else: “If both sides show sufficient flexibility, we can get this problem resolved….but it will need tough decisions from all involved.”

These comments reflect American pride that U.S. security guarantees dating back to World War II made the European project possible—as well as the accompanying sense of entitlement that requires the sole superpower to weigh in when things are going wrong almost anywhere in the world. That’s the Indispensable America worldview.

Then again, the Administration’s willingness to mainly stay out of this question and let the Germans lead reflects a Moneyball approach: stay out of it publicly but work behind the scenes through Berlin, Europe’s increasingly capable leader.

But beyond the U.S. financial contribution to the International Monetary Fund role in this struggle, Washington has offered virtually nothing of real value to narrow the gap between Greece and its creditors. That’s the Independent America approach. Americans can’t bankroll European unity, and ultimately, this story is none of Washington’s business.

Individually, each these approaches make some sense. Combining them in an ad-hoc manner doesn’t.

What does the President mean when he says: “We can get this problem resolved.” Who is “we?” The U.S. is either involved or it isn’t. There’s no point in applying pressure on all sides if you’re not offering anything to help untie their knot. 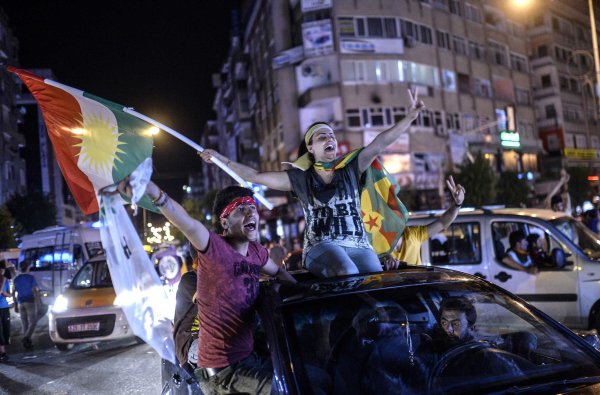 The Election Loss for Turkey's Erdogan Is a Victory for Democracy
Next Up: Editor's Pick