“Whenever I present our work, I have to allow for laugh time,” says Nicholas Tatonetti, a scientist at Columbia University Medical Center.

Not a common practice for a serious academic researcher, but then again, Tatonetti studies something quite unfamiliar to those more accustomed to the intricacies of biological and molecular explanations for the human condition. “I study the month people were born in, to see if that changes their risk of developing disease in their entire lifetime,” he says. And in his latest report, published in the Journal of the American Medical Informatics Association, those results are pretty eye-opening.

By delving into the extensive database of patients seen at Columbia Medical Center over 14 years, beginning in 2000, Tatonetti and his team did a first-of-its kind look at whether birth month has anything to do with disease risk. Some previous studies have looked at the potential connection, but these investigations focused on individual conditions such as asthma and brain conditions, and therefore might have suffered from disease- or population-biases.

Tatonetti found that among 1,688 conditions for which patients were seen, 55 showed a strong relationship with birth month that could not be explained by chance alone. These included 20 conditions that were already described from previous, smaller studies, and 16 completely new associations. These included a surprisingly large number of heart-related diseases.

“Not only was it surprising that nobody had studied the relationship between heart disease and birth month yet, but we found not just one association but several with the same trend of increased lifetime risk of heart disease for those born in late winter and early spring,” says Tatonetti. “That’s suggestive of a mechanistic relationship, although we don’t yet know what that is.”

Earlier studies, for example, had connected birth in late summer or fall with asthma or respiratory problems, since mothers pregnant during the winter may be more likely to catch the flu or other respiratory infections. Tatonetti’s group is collaborating with 40 other institutions around the world to standardize patient electronic health records so the anonymized data can be studied for possible explanations of the birth month trends. The database will include environmental data as well, since it’s well known that environmental exposures — to things such as pollution, second hand smoke and more — can influence expectant moms and their developing fetuses.

He prefers to call what he does a study of seasonality rather than birth month. “Astrology puts a lot of stock on what month you were born in, and that really hurts this type of research, since there isn’t much scientific evidence to support that,” says Tatonetti. “But seasonality is a proxy for variable environmental factors present at the time of your birth, and we are learning more about the very large role that environment, and gene-environment interactions, plays in our development. This could be one way to start mapping out those gene-environment effects.”

To see which conditions you might be more vulnerable to developing, find your birth month in the wheel below. 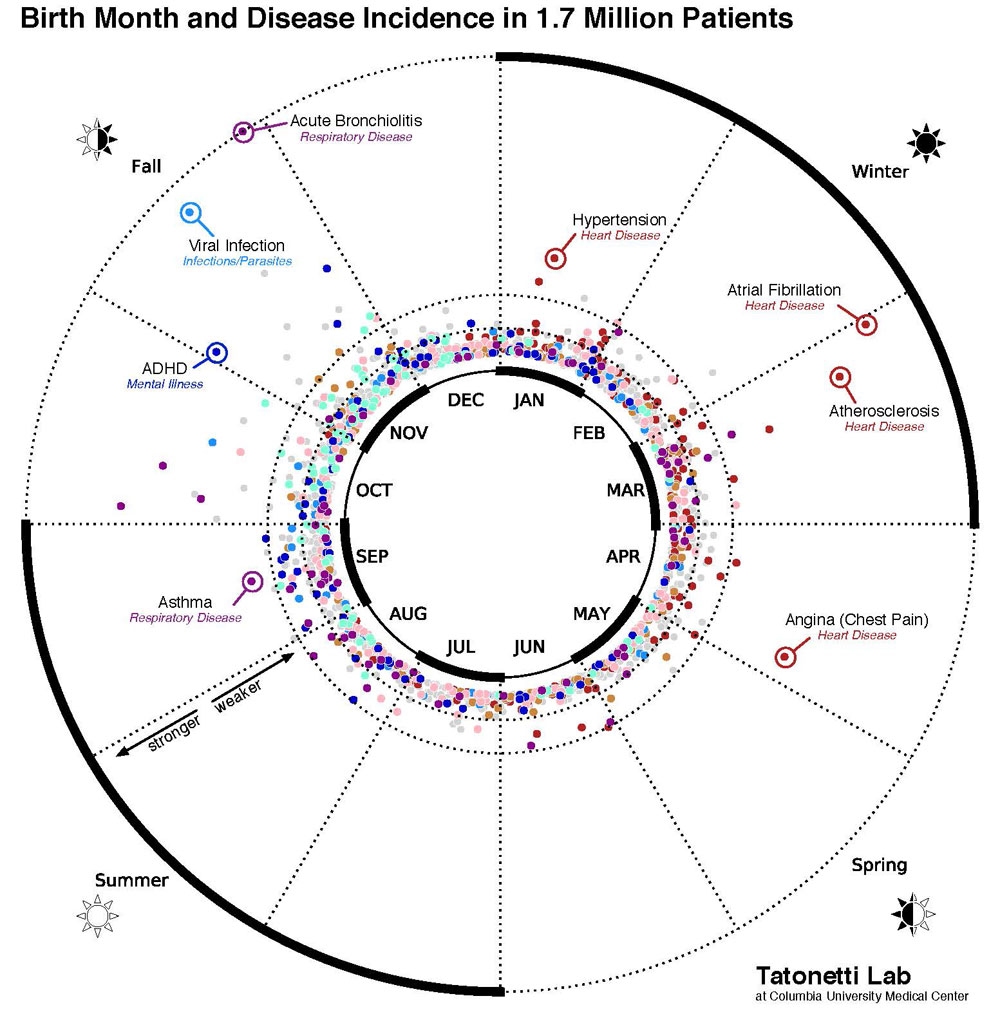 Read next: How Your Cat Could Make You Mentally Ill