Why Some California Cities Are Bracing for a Bear Invasion

MONROVIA, Calif.—June is the beginning of bear season, and California game warden Marty Wall is doing the rounds in this quiet suburb only 20 miles from downtown Los Angeles. In his green pickup truck, the wildlife veteran patrols the streets as he waits for locals to report problem bears.

That’s right—bears. Wall, a lieutenant at the California Department of Fish and Wildlife (DFW), has 23 years experience with bears and other wildlife. He’s chased them through backyards, across golf courses and on freeways. And, like his counterparts across the state, he is likely to face a rapid increase in the number of bear calls in coming months.

The drought in California has killed more than 12 million trees in the forests of Southern California. And while many small animals that can’t move have died off as their habitat shrinks, bears and other big game have simply moved rather than compete for food in a cramped forest area. For many of California’s 35,000 black bears, that means venturing into residential neighborhoods, searching for food in garbage and trash. “Accidentally or not we supply what they need to survive. Just about every lawn has a meal in it,” Wall tells me as we roam the foothills in his green pickup truck. “Black bears are just looking for a handout, the easiest path through life.”

Whether or not you think bears are on the animal equivalent of welfare, the drought has increasingly brought bears into contact with humans in recent years. Wildlife officials in Central California’s Kern County, for instance, received 1,400 bear calls between June and December of last year, according to DFW wildlife biologist Vicky Monroe. That’s more than the county received in the 20 previous years combined.

“No one had any idea of what the drought really meant before last year. We weren’t in a position to be saying more publicly that there were measurable impacts,” Monroe said. “But last season was just insane.”

Officials say they expect these numbers to grow as the drought continues to kill off forest land. The ever smaller snowpack—which was at its lowest —may also be affecting hibernation patterns, causing bears to forage for longer than they would otherwise, according to Patricia Kruger, regional threatened and endangered species coordinator at the U.S. Forest Service. Officials have sent experts door-to-door in affected neighborhoods, held town hall meetings and canceled vacations to prepare locals for the day when a bear lands on their doorsteps.

Don’t get too worried, though—Wall says that there’s no reason to fear a bear invasion if you’re smart. Bears may stop by your backyard, but they’re more interested in sifting through your garbage for Big Mac leftovers than confronting you. In Wall’s experience, it’s people that tend to turn a bear sighting into a problem. Slapping a bear is bad idea, he tells me. So is trying to take a selfie with a bear. He’s seen locals attempt both.

Despite that, there hasn’t been a deadly bear attack in years. Most bears are captured and returned to their natural habitats, but, in cases where bears do attack, Wall and his counterparts respond and the bear is put down. “I like to think of it more as a misunderstanding than an attack,” he says of most interactions between bears and humans. “You have a bear trying to get a sandwich and then gets a finger. And then you call that an attack.”

Most Monrovia residents know how to handle bears. The city has more sightings of the animal than all but two cities in California—the mountain towns of Lake Tahoe and Mammoth Lakes. Official street signs are emblazoned with a “bear crossing” warning and most sightings don’t even elicit a phone call to wildlife authorities. Wall, one of four game wardens that works in the area, has become such a presence in the community that the city manager waves hello as he passes in an opposing car.

People in other communities where bears could appear in the coming months may not be as welcoming. Wall, who patrols a swathe of Southern California that includes two-thirds of Los Angeles County, says that people unfamiliar with bears are often unforgiving. Killing bears in residential communities is illegal, but it’s hard to prosecute, Wall says. Bears found in residential communities are often riddled with bullet holes. When they survive the bullets—and they often do—they still need to avoid poisoned food.

“How many of these bears, now that they have to wander further, are going to come across people and have negative interactions?” Jason Holley, DFW supervising wildlife biologist, asked rhetorically. “That’s what we’re worried about.” 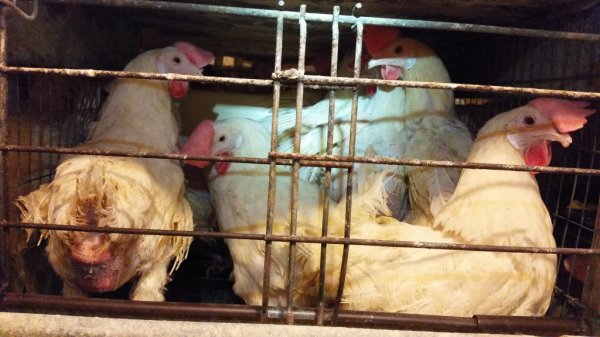 Investigation Reveals Scary Truth About Some Costco Chickens
Next Up: Editor's Pick