What Chess Can Teach Us About FIFA

Garry Kasparov is the chairman of the New York-based Human Rights Foundation. His book on Vladimir Putin, Winter Is Coming, will be published by PublicAffairs in the fall.

Sepp Blatter was the president of the international football federation, FIFA, for 17 years before he announced his resignation last week. His resignation came in the wake of two notable events: a set of U.S. indictments against top FIFA officials for bribery and racketeering and Blatter’s re-election by a wide margin. This sequence is a perfect illustration of the sense of impunity Blatter and FIFA enjoyed for so long. That Blatter resigned after such a show of bravado likely indicates the scope of the charges yet to be announced.

The global attention this scandal has received reflects football’s status as the world’s pastime. “The beautiful game” has a unique position due to its overwhelming popularity, and the financial and political clout that come with that popularity. The International Olympic Committee (IOC) may be more prestigious, but the Olympic Games pale in comparison to the day-to-day passion people all over the world feel for football. FIFA has exploited that spiritual element to build a temple of corruption, one that was practically immune to the law until now.

Perhaps it took a nation with more respect for the rule of law than for the game to achieve this long-overdue breakthrough. Football is such an outlier historically in the U.S. that it even goes by another name here. But it doesn’t matter if the growing list of indictments against FIFA officials call the sport soccer or football. The corrupt games must not go on.

International sports federations often exist in a strange, extraterritorial legal netherworld. Their power structures are opaque, and those who arrive to power are often quick to rig the system to perpetuate their control. The myriad sources of cash—public and private, individual and corporate—combine with the lack of institutional transparency and personal accountability to create an ideal breeding ground for corruption.

I spent most of my 30-year professional chess career battling with FIDE, the international chess federation, and its army of entrenched and shady bureaucrats, who took over seamlessly from their Soviet predecessors. In 1993, as world champion, I helped launch a new professional association in an attempt to free chess and its leading players from FIDE. Although the new organization enjoyed some modest successes, the schism it created in the chess world damaged the sport’s reputation.

By 1996, FIDE was back in full control under the chess world’s version of Blatter, president Kirsan Ilyumzhinov of Russia, who has now been in charge for nearly 20 years. I ran against him in 2014 on a well-funded reform ticket, crisscrossing the globe for a year. It was all for naught, unfortunately for me and for the chess world, which continues to be run by those who take resources out of the game instead of bringing them in.

Ilyumzhinov, like Blatter and IOC president Thomas Bach, received personal support from Russian leader Vladimir Putin, and Russian embassies around the world mobilized against my campaign. Chess has a special place in Russian culture, but the real interests of those in charge are power, prestige, and money.

Dictatorships have a longstanding mutual affection with great sporting spectacles. The “Nazi Games” of 1936, when the Olympics were held in Berlin, are the most famous example. It’s less widely known that imperial Tokyo and fascist Rome were the next scheduled hosts of the Games, which were canceled due to World War II. Argentina’s brutal military junta acquired the 1978 World Cup and covered the city in propaganda.

Leaders can benefit from the international spotlight such events bring. The Moscow, Beijing, and Sochi, Russia, Olympics served the hosts’ purpose of giving glory and credibility to regimes criticized for their record on human rights. Mingling with sports stars and preening with foreign dignitaries is an ideal way for a leader to burnish his cult of personality and to prime the pump of nationalism. It’s almost as effective as war.

These events can also provide convenient opportunities to launder money as well as reputations. An added bonus is the money that floods in from sponsors and media partners and the legitimacy that provides. Giant corporations like NBC, Visa, Adidas, and Coca-Cola have proudly backed events in nations with atrocious human rights records. (Freedom House rankings: China: Not Free. Russia: Not Free. Qatar: Not Free.) These companies are based in the free world and are vulnerable to public pressure over how they send billions of western consumer dollars to some of the world’s worst regimes. In recent years, many companies have “gone green” or made great strides in improving labor practices due to such pressure. Fighting for human rights and against corruption is as worthy a cause for public outrage. As with the organizers and federations, the sponsors and broadcasters often defend their involvement with, “it’s sports, not politics,” ignoring that providing a lofty platform for despots is indeed politics.

The brazenness and scale of the alleged corruption described in the FIFA indictments does not happen overnight or in a vacuum. Corruption spreads when everyone agrees to look the other way. Fraud and bribery carried out with such impunity require fertile soil, and if there’s anything I’ve learned from dealing with sports politicians over the years, it’s that there’s no one better at producing top quality fertilizer.

We can hope that this shake-up will lead to real institutional reform and transparency in FIFA, and that this movement will spread to smaller federations. It won’t be easy, and it cannot be done just by U.S. prosecutors. Taking the 2018 and 2022 World Cups away from Russia and Qatar would be a good start if FIFA’s new leaders want to demonstrate they are serious about cleaning up their act. It would be a change of direction worthy of Leo Messi himself.

But in the end, money talks. FIFA might not want to cooperate with the FBI, but they won’t say no to McDonald’s and Adidas. At some point the fans and sponsors will have to decide whether they care enough to demand reform, and if our most beloved pastimes should reflect our most cherished values. 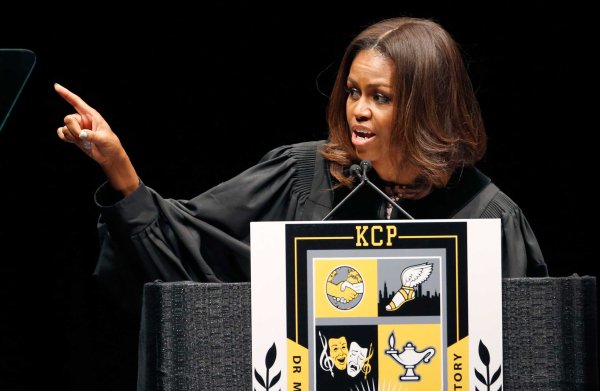 Michelle Obama to Grads: 'Stay Hungry'
Next Up: Editor's Pick