Confession: I don’t like superheroes. Watchmen author Alan Moore once suggested their existence in American culture “might have something to do with a kind of an ingrained American reluctance to engage in confrontation without massive tactical superiority.” Nonetheless, superheroes are now pretty much ubiquitous in our entertainment, and I submit that at some point we’re going to have to grapple with some of the less pleasant particulars of why that’s the case.

But it’s also testament to how well the Arkham games work that the idea of playing a protagonist as sadistic, pretentious, and at times borderline sociopathic as Batman doesn’t really factor when the game plays this well (and if you are a Batman fan, all the better for you). Arkham Knight, which sees Batman square off against old enemies and one new (the eponymous and identity-unknown Arkham Knight) in a vast open-world playground, is developer Rocksteady at the top of its game, expressing a masterful, anted-up understanding of how and why its series finally broke gaming’s “awful superhero tie-in” curse half a decade ago.

Here’s the stuff I liked.

Is the Joker really dead?

I was prepared, upon Arkham Knight‘s announcement years ago, to toss it in the trash if it turned out the Joker’s demise in the last game was just an emotional exploit intended all along to preface another soap opera-worthy resuscitation. (Hey, just because the corporate comics do it doesn’t mean games can’t take the higher ground.)

But no, Rocksteady went and… Okay, I can’t confirm that the Joker is or isn’t in Arkham Knight. That would be telling. But I can tell you this: Rocksteady manages to get you thinking about the question in the cleverest possible way. In fact I’d argue it’s the narrative component in the game that’s pulled off best.

Arkham Knight‘s version of Gotham is a wonderland

No, not in the John Mayer sense, but consider all of the stops pulled and every pipe-blasting key depressed simultaneously. The reimagined version of Batman’s sprawling urban playground, which transpires on three brand new bridge-linked islands—you can see Arkham City and Asylum‘s haunts in the distance, but they’re off limits—is a gloom-fogged goth-tropolis with creepy art nouveau inflections.

Greasy light-source-lit curtains of rain descend from moonlit thunderheads onto commercial rooftops gone to wrack and ruin. Those rooftops crown buildings taller and more granular than ever, with more places to find refuge, more fleshed out internal areas and clever quick-entry grates that thrust you through ductwork mazes, letting you cruise like a missile into (and back out of) buildings.

“Let’s even the odds,” growls Batman at the game’s outset. And so he does, conjuring the game’s taciturn sidekick, a sleek, weaponized behemoth thoughtfully integrated into every aspect of the game. It yanks open grates, lifts heavy cargo, grapples up the sides of buildings, speeds to your location with the touch of a button, and can transform with the pull of a trigger between speedy, straightforward roadster and a strafing, missile-lobbing tank.

You might as well call the game Arkham Ride, because you’ll cover way more ground tearing around in this thing, fully transitioned from Arkham Asylum‘s absurdly tail-finned post-Burton nod, to more of a Nolan-ish tumbler with 360-degree swiveling wheels. It’s an essential companion, whether solving environment puzzles or battling squadrons of the Arkham Knight’s tanks. Worries that the Batmobile would feel like a forced design element were definitely unfounded.

Every aspect of combat has been improved

And that’s saying something, because no one was complaining. At their core, Arkham battles are about stalking tactical playgrounds with asymmetric conceal or assail points, evaluating before engaging. In Arkham Knight, it’s more nuanced than ever, but without feeling overcomplicated. Rocksteady and Warner Bros. Montreal have been playing a long game of rock-paper-scissors with the series’ tactical battle system, iterating enemy types and behaviors with each installment to revitalize the series’ core virtue without radically rethinking it.

You can now throw thugs as part of a counter, for instance, and you have to stay behind alert enemies when stalking from floor grates, lest they spy you stalking (and if they do, they can detonate thermal charges that cascade through the ventilation system—if you don’t vamoose before they go off, it’s sayonara). And if you’re the silent type, quietly dispatching enemies at leisure, there’s a counter for that as well: enemies can now rouse fallen comrades, so you have to be quick and mindful of patrol trajectories.

Batbelt item selection, a hinky multi-tier affair in the prior games that sometimes led to erroneous weapon selection in the helter-skelter of combat, is now a single tier circle, placing everything in immediate, pinpoint reach. Some of the environment puzzles are exceptional, like a sequence that plays out high above Gotham, where you’re basically playing Super Monkey Ball with airship cargo.

Grate scurrying’s been simplified, too, minimizing the old first-person crawl by generalizing movement to broad swathes of a level’s subfloor, which speeds maneuverability. The sheer array of side activities this time, be they Rocksteady’s insidious new Riddler puzzles or the barrage of rogue’s gallery subplots, are almost overwhelming (suffice to say there’s an astonishing amount to do, and that’s before the imminent DLC).

It’s not the final installment in a trilogy

This one’s more a point of clarification than a like/dislike. It’s become an unofficial thing to call the Arkham series a trilogy, I guess because last year’s Batman: Arkham Origins was handled by a different studio. Warner Bros. as yet makes no such distinction, and since Origins was a strong and arguably essential entry in the quartet, it was nice to see Rocksteady scatter subtle references back to Origins‘ events throughout Arkham Knight. What’s more, you can draw a line directly from Arkham Knight‘s satisfying “survey the crime scene for evidence” reconstructive puzzles back to Origins‘ DVR-like “find the next clue” sequences.

And here’s the stuff that didn’t work for me…

Some of the quips fall flat

Like when Batman tells a recurring series ally “I’ve got a feeling,” and the character replies “Yeah, I got a feeling too. Doc gave me some cream and it cleared up in no time.” Yuk-yuk!

The police let all the bad guys go

You know all the work you did the last two games to clean up the psychotic super-villanous riffraff? Yeah, so Gotham City Police had to let all those folks go, because…well, you don’t need me to tell you. Batman’s real superpower, it turns out, is not going totally bat**** crazy having to fight the same opponents over, and over, and over…

Remember the tedious, thumb-twisty way you had to swivel the gamepad’s thumbsticks to make one of Batman’s gizmos cough up phrases that unlocked doors in the last two games? It’s back! Yes, I suppose it’s better than stopping up the game’s pace by forcing us to work some sort of tortuous Captain Crunch decoder wheel, but it doesn’t feel very Batman-ish when hacking security consoles is just a rote test of finger dexterity.

There’s definitely a strategic, predatory element to lining up two or three enemies and taking them out all almost automatically, and it can certainly help thin out dangerous clusters of thugs. But Arkham Knight‘s new “pinball KO” maneuver feels antithetical to the series’ modus operandi—a stylish cheat code to ease combat masquerading as a new Bat-skill.

A related cheat: team takedowns, where you’re battling a group of enemies aided by one of your sidekicks. It’s a stylish, penatly-free way to switch characters in the midst of battle, but that’s all it is: a tactically shallow freebie KO. 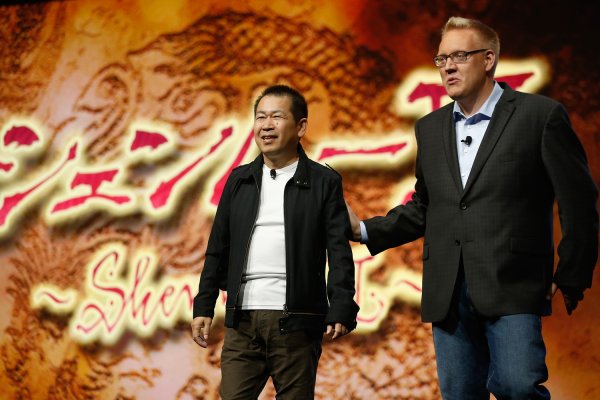