What Pope Francis and Joseph Biden Can Teach Us About Suffering

Vice President Joe Biden, center, pauses alongside his family as they to enter a visitation for his son, former Delaware Attorney General Beau Biden, at Legislative Hall in Dover, Del, June 4, 2015.
Patrick Semansky—AP
Ideas
By Christopher J. Hale
Hale is a Democratic politician from Tennessee; he has been a Catholic nonprofit executive and helped lead faith outreach for President Barack Obama.

On Saturday, Vice President Joe Biden will bury his son, former Delaware Attorney General Beau Biden, who died May 30 at the age of 46 after a long bout with brain cancer.

This isn’t the first time tragedy has struck the Biden family. Shortly after Biden was elected to the United States Senate in 1972 at the age of 29, he lost his wife and oldest daughter in a car wreck a week before Christmas. In a 2012 speech, Biden, the first Catholic vice president of the U.S., reflected on how that experience affected his relationship with God:

Biden’s anger at God is a perfectly appropriate Christian response to tragedy. From Moses and David to Mother Teresa and Dorothy Day, heroes of faith have had moments of anger and doubt. Jesus himself cried out from the cross, “God, why have you forsaken me?”

In January, while Pope Francis was visiting the Philippines, a young girl who had lived on the streets asked him, “Why did God let this happen to us?”

After praising her for her courage, Pope Francis said that she asked a question that does not have an answer. The pope didn’t provide a distant theological reflection on the epistemology of evil. He simply focused on her tears, saying, “Only when we are able to weep about the things that you lived can we understand something and answer something.”

This is the kind of response that Joe Biden might appreciate. The vice president has expressed frustration with people who tried to related to his personal tragedies: “I have to tell you. I used to resent people. They’d come up to me and say, ‘Joe, I know how you feel.’ I knew they meant well. I knew they were genuine. But you knew they didn’t have any damn idea.”

Pope Francis tells us that we must respond to tragedy by asking God for “the grace to weep” at the sufferings of others. Photos emerged Thursday of the vice president crying in front of the casket of his oldest son. If Francis is right, these tears aren’t a sign of weakness, but tremendous evidence that faith is still alive in Joseph Robinette Biden.

No one can claim to know why God let Beau Biden die so young, but we do know that the God who lost his son Jesus is crying with Beau’s father. In Joe Biden’s suffering, the vice president is giving his fellow Christians a tremendous example of what it means to be a follower of Jesus.

Faith isn’t always a source of answers, but it can give us a sense of the road forward. It’s alive in anyone who has suffered an intense loss and kept moving, who has doubted the existence of God and yet prayed anyway, and who has endured suffering for the sake of another and found great strength in doing so. 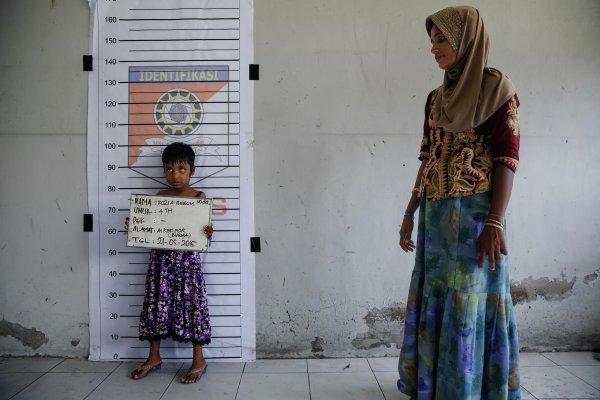 How to Help Burma's 'Boat People'
Next Up: Editor's Pick