Sen. Lindsey Graham was a frequent travel buddy on John McCain’s Straight Talk Express. The South Carolina Republican hopped on and off buses, jumped into motorcades and was among the 2008 GOP nominee’s most trusted advisers on his plane. He was such a frequent voice inside the McCain inner-circle, he was endearingly lumped in with Sen. Joe Lieberman as one of the Three Amigos.

As his own his White House hopeful now, it should come as no surprise that Graham sounds a bit like his pal McCain. The hawkish retired Air Force officer is cracking jokes, taking all unscripted questions from anyone who shows up and is challenging even his own party’s orthodoxy. The 59-year-old Republican is polling in single digits and is running as though he’s perfectly fine there, as long as he can run a campaign as his own man. He is trying to build support in the early-nominating states even though the first debate’s cast will be chosen by national polls. As one Republican who is not working for a White House bid brands it: “Straight Talk. With a Southern Twang.”

Graham launched his campaign this week with a pitch to Republican voters that promises a strong military, defense of social safety nets and unflinching honesty. He is sharing the story about raising his teenaged sister after both parents died. He is running his campaign as a referendum on President Barack Obama’s tenure as the leader of the U.S. military. “They deserve a Commander in Chief better than they have today,” Graham said Friday as he met with GOP activists in West Des Moines, Iowa.

But he has challenges far steeper than McCain. For one, no one knows Graham outside the cable networks’ booking departments. He is competing for the nomination against candidates who have run before, such as Rick Santorum and Mike Huckabee, or have dynastic help, such as Jeb Bush and Rand Paul. He struggled to attract national attention and he lacks a national fundraising machine. “Help me pay for it,” Graham joked after an audience watched a promotional video. And, like McCain, he backed overhauls to the nation’s immigration system that drew a backlash from conservatives in his party, earning him the name “Lindsey Grahamnesty,” as he relates, chuckling.

On a personal level, there are also similarities. The same flashes of impatience break through, such as Friday when Iowa Gun Owners challenged him on his procedural vote on background checks and pressed him on a donation to his political machine from gun control advocate Mike Bloomberg. His acerbic one-liners mirror McCain, who repeatedly said in 2008 that he looked into Russian President Vladimir Putin’s eyes and saw his former spy agency’s acronym: KGB. Graham tweaks that line: “I’ve been telling Putin ‘you’re a thug’ and he’s never let me down.” And he has unflinching faith in the military’s ability to crush the United States’ enemies: “I am going to unleash the American military and I am going to kick their ass.”

Graham is betting his campaign can tap into the same constituencies that powered McCain to the nomination in 2008. He is campaigning with veterans groups this weekend and announced military advisers to a packed room in Iowa on Friday. He is hoping seniors turn out for him, based on promises to defend Social Security for older Americans. And he is casting himself as an everyman, the first in his family to graduate from college and the son of small business owners. “Please understand who you are voting for,” Graham says.

Graham is even looking at McCain’s pals, turning to McCain’s new configuration of the Three Amigos. When Lieberman retired, McCain and Graham swapped him for Kelly Ayotte, a first-term Senator from New Hampshire. She, Graham is telling audiences, would be his Attorney General. 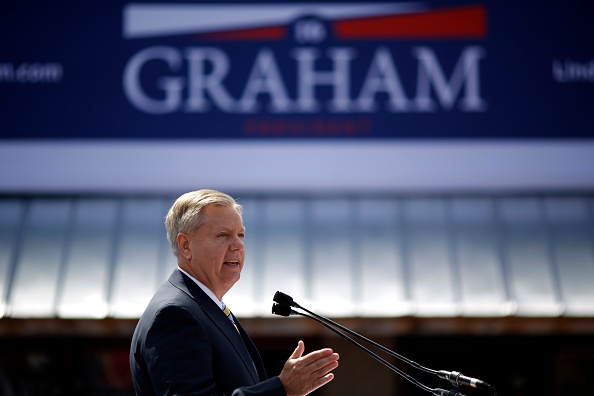 Why Lindsey Graham Matters in the 2016 Race
Next Up: Editor's Pick