Hey Enormous Fake Orca, You Had One Job

In a disastrous but innovative attempt at wildlife control, officials in the Oregon fishing town of Astoria deployed a motorized fake orca whale today in a desperate effort to scare off hundreds of sea lions that have invaded their port.

“We simply don’t have the financial resources to build barriers. We have no choice but to look for very creative and low-cost solutions,” Port of Astoria executive director Jim Knight said.

Enter the fake orca — the latest in a string of creative solutions that have included placing electrified mats and brightly colored beach balls just outside the docks, Reuters reports.

Usually, the sea lions are seasonal visitors to Astoria, a town of 10,000 not far from Portland whose population relies heavily on fishing for its livelihood. But this year, instead of staying only for the winter, they seem to have moved in permanently. Some scientists posit that they may have been driven to Astoria in search of food by warming water in the Pacific Ocean; whatever the reason, local officials complain that the unwelcome visitors are loud and messy and are eating the fish on which so many townspeople rely (and disrupting the local caviar industry while they’re at it).

Luckily for Astorians and fake-whale enthusiasts alike, the Island Mariner, a whale-watch company from nearby Bellingham, Wash., volunteered its 32-ft. promotional boat, shaped like an orca, as a possible solution. The idea was to drive the boat, which emits whale song, into the dock area, scaring the sea lions away. However, the plan hit a series of snags from the start. First, the artificial whale’s motor flooded, causing hours of delays:

Then, when the engine was replaced and the mission under way, the orca capsized.

Still determined to see the plan through, the boat orca made it into the dock area, where its whale song did not scare the sea lions away and where it capsized a second time, a Twitter user reported.

Twitter, of course had a field day, referring to the boat as “Fauxby Dick.” Meanwhile, the sea lions continue their occupation of the Astoria docks, and officials there must return to square one. 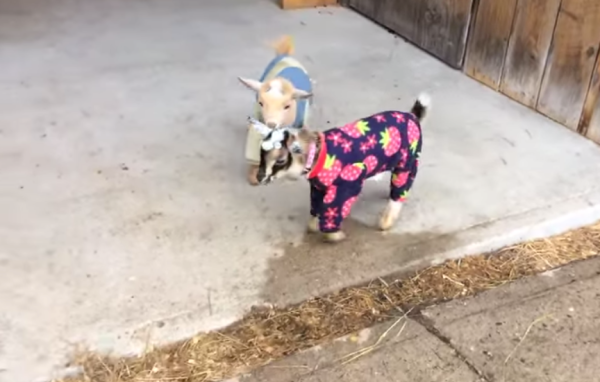 The Only Thing Cuter Than Baby Goats Is Baby Goats Prancing in Pajamas
Next Up: Editor's Pick