Allen Iverson Was Drunk During His Infamous 'Practice' Rant, a New Book Claims

Allen Iverson was drunk when he let loose with a rant that has become one of the most famous press-conference tirades in American sports history, alleges author Kent Babb in his book Not a Game: The Incredible Rise and Unthinkable Fall of Allen Iverson.

Babb told ESPN he interviewed former Philadelphia 76er decisionmakers president Pat Croce, coach Larry Brown and general manager Billy King — as well as journalists familiar with the team. Some wouldn’t outright say Iverson was drunk, but many suspected the NBA superstar had consumed a quantity of alcohol just before the press conference.

The book claims that the press conference was King’s idea and came after Iverson and Brown had gotten into an argument in the parking lot over the direction the 76ers would take after they were bounced in the first round of the 2002 Eastern Conference Playoffs.

After the argument, Iverson left and Brown told Babb, “I assumed he went and fooled around somewhere,” and then made a gesture to suggest drinking.

According to the book, Iverson then returned to the press conference where he repeated the phrase “we talking about practice” 22 times.

After his retirement in 2013 Iverson has struggled to adjust to life without basketball and the allegations appear to be consistent with other reports that the four-time NBA scoring leader is dealing with alcohol and gambling problems. 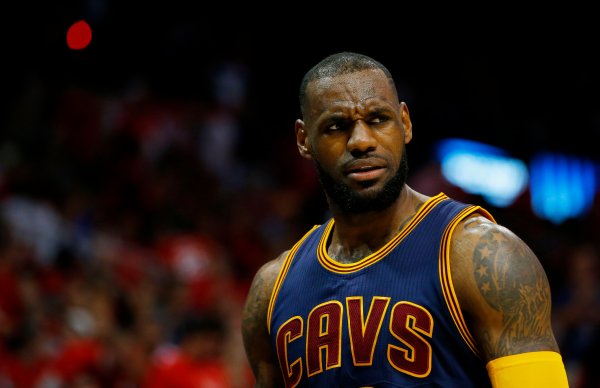 LeBron James Asks Cleveland Protesters to Rally Behind Cavaliers
Next Up: Editor's Pick