The Hazy Future for Cuban Cigars

From the new TIME special edition Inside the New Cuba. Pick up your copy in stores today. Digital edition available at TimeSpecials.com

If the opening to Cuba proceeds to its logical conclusion, it’ll be cigars all around. The island’s iconic product, forbidden as imports to the U.S. since 1962 by the economic embargo, long ago moved from sorely missed to the realm of nearly fetishistic obsession. After half a century, the hand-rolled House of Habano puros now appear to contain all that was just out of reach to Americans, as well as the flavor distinct to the soil of Pinar del Río, the southwestern province where the world’s most famous tobacco leaves are grown. The 100 million Cuban cigars sold worldwide count as one of the nation’s leading exports, up there with nickel and cane sugar, a crucial source of hard currency for a government that never figured out the economy.

It’s not just the distinctive taste. A great deal of both history and mystique gets wrapped up in the leaves assembled on the wooden tables where the tabaqueros famously sit in rows, facing the elevated platform where a lector reads a newspaper aloud, to occupy the mind while the fingers fly. A tour of the Partagás factory remains one of the tourist mainstays of Havana—state property since its building, farms and brands were appropriated, along with every other private concern, by a revolutionary government that over time actually managed to enhance the brand. Fidel Castro’s cigar was as much a part of his image as his fatigues, and far less egalitarian. The cigar was a Cohiba, a brand created specially for the upper echelons of the Communist elite (Che Guevara loved them too) before being marketed as a global label in 1982, three years before Fidel quit smoking.

The contradiction—elite taste vs. leveling ideology—never seemed to bother anyone; such was the power of a tradition that goes to the heart of Cuba’s appeal as a culture. The modern hotel where U.S. diplomats first openly met Cuban officials to discuss renewing relations was pleasant enough, but you only knew you were in Cuba within the dark wooden walls of its tobacco shop. Beside the door sits an elegantly groomed older man in a guayabera, Arnaldo Alfonso Ibáñez, rolling them fresh in Cohiba wrappers. He may have to pick up the pace. Under the new regulations published by the Obama administration, U.S. citizens can bring back up to $100 of tobacco (or alcohol) products. Should Congress vote to lift the embargo outright, Habanos, a 50-50 partnership of the Cuban state and a British firm, estimates that its sales would jump 70%.

And what would be lost? A certain cachet. Some memories. I learned to smoke on Cubans, two boxes I carried back to Washington from a visit to Havana in the late 1990s. It was good to start small—the Romeo y Julieta “Cedros”—and in the open air, to build up tolerance before moving on to the second box, Cohiba “Lanceros” so obviously counterfeit that the customs agent at the Dallas airport (“we just had a class on cigars”) handed them back to me, shaking his head. By the time I moved abroad, Havanas were about all you could buy in the duty-free humidors of the airports a foreign correspondent knows better than his own bed. I once expensed a box of Bolivar Gigantes after handing them out to help battle the stench on a Ugandan hilltop that produced not one but two mass graves; the accounting department put it through.

They also made great gifts, though it was a mistake not to tell a friend about the handful I’d tucked into his knapsack before driving him to the airport for his flight back to Los Angeles. A customs agent found them first and “cut them up there in front of me,” he reported later, not happy. He was a freelancer who wrote profiles for Cigar Aficionado, usually celebrities, some of whom would stay in touch after publication, calling him up when they got their hands on some Cubans. “The people who want ’em are getting them,” says Bill Sherman, grandson of the New York tobacconist who took in the owner of Partagás after he was driven out of Cuba. The Nat Sherman Townhouse sells its own brand, but a cabinet of 400 pre-embargo Partagás has pride of place in the members’ vault on 42nd Street in Manhattan, perhaps the largest stock in the U.S. of pre-Revolutionary cigars, a level of exclusivity that approaches either the effervescent or the ridiculous, depending. But there’s a reason for its following.

“What makes a Bordeaux from Bordeaux special?” Sherman asks. “You can’t take a Bordeaux seed and plant it in Napa Valley and get the same wine. It’s the soil, the sun, the climate.” Still, over the years, California has managed some superior varietals of its own, as drinkers grew more sophisticated and learned to trust their own tastes. Something like that may happen if Cubans hit the States.

“I gotta tell you, as a retailer, I’m ecstatic. We’ll be selling them,” Sherman says. But without the mystique of the forbidden, Cubans will have to earn their place in the pantheon. “You go to Spain,” he notes, “and Cuban cigars are less expensive than Domincans.”

From the new TIME special edition Inside the New Cuba. Pick up your copy in stores today. Digital edition available at TimeSpecials.com 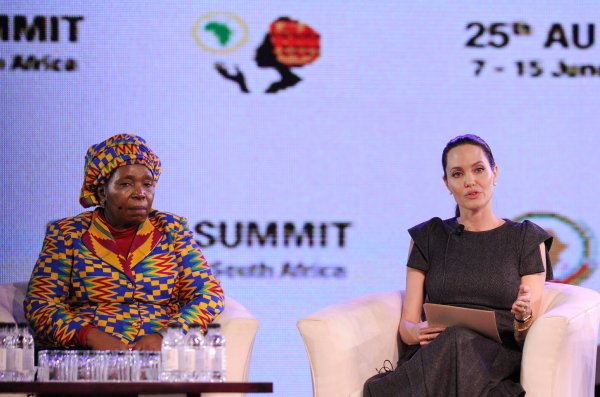 Angelina Jolie Pitt Says Violence Against Women 'Is Still Treated as a Lesser Crime'
Next Up: Editor's Pick