Spy Star Miranda Hart: 'In the Back of My Head I'm Always Writing as a Feminist'

LONDON, ENGLAND - MAY 27: Melissa McCarthy and Miranda Hart attend the UK Premiere of "Spy" at Odeon Leicester Square on May 27, 2015 in London, England. (Photo by Mike Marsland/WireImage)
Mike Marsland—WireImage
By Esther Zuckerman

What Bridesmaids was for Melissa McCarthy—a platform that allowed the world to see her comedic genius—Spy may be for Miranda Hart.

Director Paul Feig wrote the role of Nancy for the British comedian and sitcom star, who also plays Chummy on the period series Call the Midwife. Nancy is a confidante of (and worrier for) McCarthy’s Susan Cooper, who goes from being the desk-bound brains behind Jude Law’s Bradley Fine and becomes a spy extraordinaire herself. The film contains many joys; chief among them is the friendship between Susan and Nancy, two women who come into their own over the course of the film. (In Nancy’s case, mowing 50 Cent down with a full body embrace can do that for a person.)

“It was really important to me and Melissa,” Hart said. “We talked about how we wanted make sure that that was the core of their scenes together—this real sisterly love.”

Hart spoke with TIME about about the importance of this female friendship and her conception of the ideal straight man—someone who “you can sing along to musicals with.”

TIME: How did you and Paul Feig first meet?

Miranda Hart: We met in London on a Ronna & Beverly show. He was working on that show and he said, ‘I’m aware of your sitcom and would love to work with you.’ I said, ‘Well, I’d do anything to work with you,’ and then I saw The Heat, and I was like, this man’s a genius. After The Heat he said he was working on this movie called Spy and he was writing a part for me. Sort of pinch me stuff. Dream come true, really.

At the end of the film Susan turns down an invitation from a gentleman to go and hang with Nancy. What’s the importance of female friendship in the movie?

It was really important to me and Melissa. We talked about how we wanted make sure that that was the core of their scenes together, this real sisterly love, and that Nancy is desperate for Susan to win and be confident and forget about this horrible Bradley Fine person who she doesn’t like at all. If we ever do another one, I can’t wait to have a scene with Nancy and Jude Law because she would just hate him and put him down. I think that would be really fun. I love the fact that often comedy movies and romantic comedies have been the girl getting the Jude Law character, and it’s so nice to subvert that and go actually, unless you’re a really good kind man I’d rather be with my girlfriend, thanks. That’s so important.

Paul is known for his work for funny women. What do you think it is about his style that works so well with comedians like you and Melissa?

He gets women. He loves them and understands their vulnerability. He’s as bored as most women [are] of seeing the perfect woman portrayed on screen and thinking this is nonsense and not real. He’s in touch with that vulnerable feminine side, which is why we love him, and weirdly makes him all man in his three piece suits… I always say that the best straight man is basically very close to being gay. There’s your perfect straight man. You want a man that you can sing along to musicals with. I think that’s the perfect straight man.

Around the time that Bridesmaids came out, there was a lot of talk about how women are leading this major studio comedy. Has the discussion in Britain been similar?

When my [sitcom] character came on screen, it was a bit similar to Melissa’s or Rebel Wilson’s or Tina Fey—lots of talk about whether we should talk about our looks and be self-effacing. There was a similar trajectory of women coming to the fore, but they were unusual women, so the media didn’t know whether to go, ‘This is great!’ or ‘Are they making fat jokes and that’s bad?/ No one could really place it.

I tend to not get bogged down in it because I just want to be a comedian and an actress, rather than necessarily fighting the corner for women. I will always write comedy, and I will always write it with women in mind, and in the back of my head I’m always writing as a feminist and casting women—but actually, I have to step away from it, because I don’t want my work to become an agenda.

You had a sitcom before Call the Midwife came out, but Chummy became your breakout role here in America. What was that experience like?

It’s funny. I don’t know how big Call the Midwife is out there, but the people who do know me know me from being Chummy, and I feel like going, have you seen my self-penned sitcom? Can I give you a DVD? This is my baby. It’s amazing to be launched in the states just as an actress, rather than a stand up comic, because hopefully it means that I won’t get typecast as much and can do a variety of stuff. It’s been hard in the U.K. to break away from the sitcom Miranda character because it became so popular, which was great because it was a real identity for me. I enjoy being free of that in the states.

You and Jason Statham get to keep your accents in the film, but Jude goes American. Did you ever discuss that? Did that ever yield anything on set?

Oh no—it didn’t actually, except that I occasionally went into Jude’s trailer and asked his dialect coach whether I could ever do an American accent. I basically used it for free lessons.

We talked about female friendship. How much did you and Melissa talk about that and bond yourselves?

We really did. We met on set. I think we tried to see if we could have a rehearsal time, but our schedules didn’t allow it. We ended up literally just screamed in each other’s faces: ‘I can’t wait to work with you!’ Then we went out to dinner and immediately connected and laughed and had the same views about Susan and Nancy—and have become really good mates.

What was the hardest part for you of coming into a situation like this? Was there anything challenging about doing the project?

My main worry all the time was letting Paul down because he’d written it for me and I didn’t have to audition and a lot of the Americans didn’t know who I was. He really put his neck out for me. [I was sort of a] needy child to my comedy father. He was constantly having to reassure me. It was definitely slightly more nerve-racking my first day on set, but then my first day was tackling 50 Cent to the ground, so then I was fine.

What was the most surprising thing you learned about him by tackling him?

How nice he was! He was just sweet. He really got it and found it funny. I was like, ‘This is completely normal that I’m just hanging out with 50 Cent now.’ We both rushed back to the monitors and went, ‘Paul! We want to have a look at it! What does it look like?’ 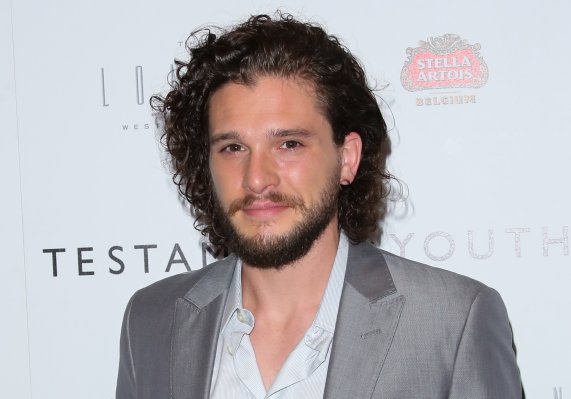 Kit Harington on His 'Teenage, Morbid Fascination' With Testament of Youth
Next Up: Editor's Pick