Marvel's Announcement Could Be a Gamechanger for Female Superheroes

Though white dudes may be front and center in the Marvel Studios movie The Avengers: Age of Ultron, the universe of Marvel Comics is about to get a lot more diverse.

The comic book publisher has spent the last few years promoting a wider array of heroes, and on Thursday it announced an”all-new, all different” look that may usher many of those characters into the spotlight. Among them is a growing group of popular female crusaders—women heroes who have long been absent from comic book history and the big screen.

The art for the Marvel Comics redesign shows that four popular and recently introduced female characters will feature prominently in the new world: Ms. Marvel, a teenage Muslim superhero; Spider-Gwen, Peter Parker’s girlfriend who, in this version of the universe, is bitten by a radioactive spider and receives super powers instead of him; Carol Danvers, a.k.a. Captain Marvel, who will be the leading lady in Marvel Studios’ first female superhero film; and a female Thor, who took up the Norse god’s hammer last year.

Though the creation and promotion of these female heroes has stirred controversy among some longtime fans, the books have sold very well, thanks in part to a growing female fanbase. “Event comics” like first issues of series usually sell around 100,000 copies. Spider-Gwen #1 has sold over 250,ooo copies. Ms. Marvel #1 was the bestselling Marvel digital comic of 2014. And Thor #1—featuring the female Thor—has outsold her male predecessors with over 200,000 copies sold.

The success of these titles suggests that both male and female fans are desperate to see people who look like them saving the world. If there’s any reason that Marvel is reassessing its long-standing universe, it’s that the company has an economic incentive to continue to promote these characters and pursue their oft-stated mission to reflect the world outside your window.

Read Next: This Map Shows How All the Future Marvel Movies Are Connected 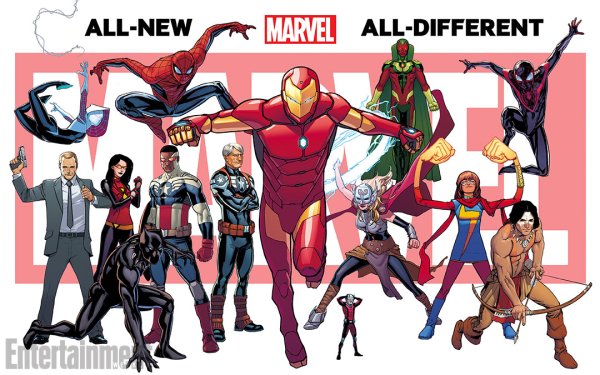 Marvel Comics To Launch a New Generation of Super Heroes
Next Up: Editor's Pick