The Iconic Coca-Cola Bottle Is Getting a Surprising Update

Coca-Cola can and bottle images appear on the side of a trailer outside the Coca-Cola Enterprises Inc. bottling facility in Niles, Illinois, U.S., on Thursday, Feb. 25, 2010.
Bloomberg—Bloomberg via Getty Images
By Dan Mitchell

Coca-Cola has come up with a new bottle: one made entirely of plant material—including sugarcane.

It’s called the “PlantBottle.” Coke debuted it as the World Expo in Milan, Italy, a food-tech conference.

Coke said in a statement that the PlantBottle represents a “more responsible plant-based alternative to packaging traditionally made from fossil fuels and other nonrenewable materials.” The company will use the container across its beverage brands: soft drinks, water, juice, and tea.

The bottles are still plastic, but made from plants including sugarcane and byproducts of processing sugarcane, rather than petroleum products, which leave a much larger environmental footprint. It was developed in partnership with Virent, a processor of biofuels and biochemicals.

Coke made something of a splash in 2009, when it announced that its containers would be made up of 30% plant material. It has sold 35 million of those bottles since then. Coke says those bottles have kept a total of 315,000 metric tons of carbon dioxide, a greenhouse gas, from being released into the atmosphere.

The Milwaukee Journal-Sentinel reports that Coke plans widespread distribution of the bottles by 2020. 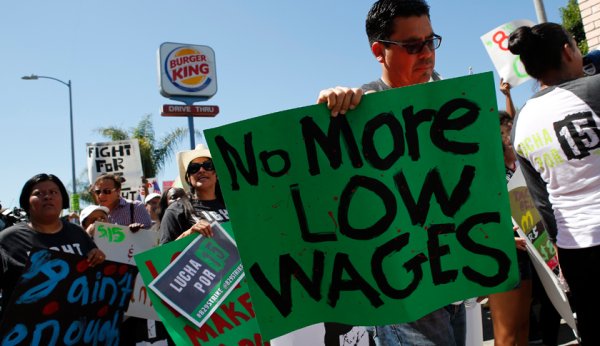 Why New York’s Fast Food Workers Might Not Want a $15 Minimum Wage
Next Up: Editor's Pick