Blake Lively on Her First Year of Preserve: 'The Site’s Not Close to What I Want It to Be'

Blake Lively’s website Preserve has been online for nearly a year. But the actress insists it’s still a work in progress.

Lively spoke to TIME for a piece in the issue on stands June 5 about a growing set of Hollywood stars who are building businesses online; the slouchy garments and indulgent snacks on Preserve all showcase Lively’s particular interest in American craftsmanship. But the site isn’t where Lively wants it to be, owing in part due to a set of concerns specific to Hollywood actors: The launch was rushed to coincide with an August 2014 Vogue cover. “I couldn’t call Anna Wintour and say, ‘I need six more months,'” Lively says.

Concerns aside, though, e-commerce suits the Age of Adaline star, who particularly delights in the community spirit among those in the start-up space. She’s spent the past year meeting with executives and business leaders, whereas in Hollywood, she says, the culture is different. “It’s not that actors aren’t generous,” Lively says, “but no one has connected me with Meryl Streep to muse about what has worked onscreen and why.”

TIME: Do you see yourself as an actress or a businesswoman?

Blake Lively: I don’t see an “or” there. I see myself as a storyteller—or at least that’s what I try to do. As an actress, I try to tell stories in the most honest way possible, and hope people will connect to that emotionally. With Preserve, I’m doing the same thing: meeting chefs, meeting artisans, designers, craftsmen. I’m moved by their stories and I’m sharing them with my friends. Instead of keeping that insulated as a personal pleasure, I’m sharing that in a greater way. I’ve always been so drawn to this: I kept over 80,000 photos from 12 years of traveling, taking photos in restaurants and shops, names, photos, business cards. I still don’t know how I’ll bring it all together. This is my attempt at that. We’re a start-up, and we’re experiencing the growing pains of a start-up. It’s a full-time job, and it’s hard to combine with another full-time job. But they lend themselves to each other: I discover antique shops or an incredible painter when filming on location.

Do you see Preserve as a business with a path to profitability? Is there a business plan?

I hope there’s a business plan! It’s a proper company. We have a team of amazing people coming to work and bleeding, sweating and crying every day, and loving it. That’s the goal, of course. You don’t experience these newborn blues in order to have done it and let it fold and check it off your list. You believe it can be impactful and different than everything out there. It’s hard to make something different. I’m lucky to have friends who are successful entrepreneurs, and their companies’ valuations are very impressive and they’re up against time and money. I’ve seen such generosity that I haven’t seen in the profession of acting—it’s not that actors aren’t generous, but no one has connected me with Meryl Streep to muse about what has worked onscreen and why. In the world of entrepreneurs, I’ve been amazed to be connected with other companies’ CTOs and CFOs and talk about what has worked and what didn’t.

Who is the Preserve customer?

It’s women… Women are our biggest audience. The reason I pause is because I believe I am the Preserve customer. It’s my vision and I’m the one creating, curating, and driving this. If I look to myself first, I’m a woman for whom family is the most important thing in my life. I love stories, I love quality stories. Quality doesn’t come with a number. That is to say that yes, one of my favorite restaurants in the world is French Laundry… but I also love Waffle House. If it’s delicious, there’s no judgment. I’ll wear a fancy designer coat or handbag but with a Forever 21 shirt. I love to—you’ll think this is a plug for the site, but I love to preserve things that are old and give them new life. “Is this Chanel?” “No, Forever 21, on sale for $3!” But you pair it with something you had to save up for… or something you shouldn’t have bought and you tear up the receipt so your husband won’t see it. The reason we have a male presence on the site isn’t because we want to reach everyone at once, but because family is so important to me that I don’t do anything for myself without also wanting to give back to them. It’s a very selfish thing to give to others—it feels good to give. My niece can go on Preserve, and my grandma can go on Preserve. That’s the reason it’s the concept of “preserve.” It’s preserving what lasts. That should be able to hit any generation. Our biggest audience would be millennials.

Did you anticipate the initially negative reception to Preserve?

I see what happens in the world of female entrepreneurs and I see what the media does. And that they pit women against each other and there’s an “or”—should women stick to this or this? I knew we’d probably get grilled, or celebrated for being someone they’re not already picking on. It felt like a new kid coming to school: I’ll get picked on, or liked, for being from a different place. And I’ve been to 16 schools in my life, so I’ve experienced that bullying. There is constructive criticism we’ve taken to heart. And then there’s people being mean for the sake of being mean, or when you’re trying to be light and people take you literally. It’s a nasty world. You don’t see male entrepreneurs pitted against each other, destroyed, picked apart, and every word they say served up to judge. That’s disappointing, but we’ve got so much going on that we can’t pay attention. The things that keep me up are things I look at on the site and I know could be better. I knew this was supposed to be better. Time and money, time and money. What I wanted Preserve to be at launch was not what it is at all. It’s just impossible! We found ourselves at launch and we had a Vogue cover set up, so I couldn’t call Anna Wintour and say “I need six more months”—people hacked into our site a week and a half before it was meant to launch, so the site leaked. The site’s not close to what I want it to be. I hope by the time it’s what I want it to be, my standards will be raised infinitely more.

What don’t you like about Preserve as it exists?

Our site was designed the way it was—the Tumblr layout—to have a certain functionality that other sites don’t have. It’s incredibly time-consuming, but it’s what I believe will be the most impactful way to connect emotionally with content, but also to shop. The site was designed for that, but we weren’t able to do that. It’s an e-commerce site that’s a confusing experience—the UX and UI feels like a Matryoshka doll. Our site wasn’t designed to be navigated the way it’s being navigated now. There are comparisons you have to make that are easier to make when you’re a start-up that doesn’t have the attention on it because of my own existing brand. I always thought we’d be able to have our Petri dish of a company and after three or four years, people would notice us and we’d get press and attention. The problem is what most companies want: That level of press or demand. We have a really dedicated community. We have more than we’re equipped to handle. It’s a high-class problem, but quality can be compromised in the execution, whether it’s the logistics of checking out of a site or getting people the packages. If I could, I would personally wrap each present—in my family, we spend two weeks wrapping gifts and we don’t unwrap them until after New Year’s because they’re so pretty! Every layer of the company can and will be improved. It’s hard to have it under a microscope. If I had my dream, I’d put it on hold for six months or a year and then relaunch it. But I’d want to do that every three months.

You were—and are!—such an in-demand actress. Why take on a project of this magnitude?

I don’t know. [sighs] I wish I had a really good answer. I’d tell you after too many drinks, but I don’t drink. It’s such a passion of mine. I never knew I wanted to be an actor. I fell into it and was lucky to have incredible opportunities that shaped my life. There were things I planned for my life that I missed out on. Going to an Ivy League school was my dream. I wanted to be an entrepreneur and carve my own path. My mom is the reason I wanted to do this. She was successful but was so present as our mother. She knew how to sew together any pattern from a ballgown to a bias-cut dress. She was creating an environment and making things magical and she put a story behind everything. I always wanted to do that and thought I wouldn’t be an actor. I love acting and love the opportunities but I dont always feel great at it. The thing I feel great at is this—what I do outside of acting. I think I’m an explorer. I think I’m good at being an explorer and a student. I’m good at sharing, unless it’s dessert! I wanted to do something I felt good at and that I could control. Acting is for-hire; it’s transactional. This, whether it’s good or bad, is something I shaped. I hope it’s something my kids can look up to whether they want to be a part of it. I want to always do things that scare me. This scared me and still does. 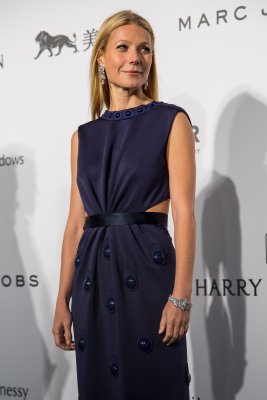 Gwyneth Paltrow on Comparisons to Other Actresses: 'There’s Something Slightly Misogynistic About It'
Next Up: Editor's Pick