You’ve heard the news that Taco Bell is phasing artificial flavors and colors out of its food. Good news, right? Don’t celebrate with a Crunchwrap so fast: You could still OD on calories, saturated fat, and sodium if you decide to head south of the border. If the Bell is your only dining option—or you’re really craving those southwestern flavors—go with these better-for-you choices suggested by registered dietitian Molly Kimball.

The typical Cantina Power Bowl with grilled chicken, which on top of the meat includes black beans, rice, cheddar, pico de gallo, guacamole, reduced-fat sour cream, romaine, and avocado ranch sauce, has 490 calories, 1,270 milligrams of sodium, 8 grams of fiber, and 29 grams of protein. “That’s not bad,” Kimball says, “but it can be better with a few simple tweaks: Order it without the white rice, which shaves off 160 calories and 27 grams of carbs, not to mention 340 milligrams of sodium.” This upgraded bowl is still protein- and fiber-rich, without the refined starch.

At 390 (chicken) to 400 calories (steak), with 21 grams of protein, either burrito is a solid bet. The only problem, just like the with the Cantina Power Bowl: the sodium (1,090 milligrams), Kimball says. “But that’s one of the natural drawbacks of most fast-food joints. And a significant amount of the sodium, 450 milligrams, is from the wrap itself.” To eliminate some of the salt factor, “have just half of the burrito, then use your fork to scoop the protein and veggies out of the other half of the wrap,” Kimball suggests. Bonus: You’ll at least save about 100 calories and 16 grams of carbs that way, too.

“It’s one of few fast food breakfasts that aren’t on carb-overload, packing in as much protein as carbs,” Kimball says of the breakfast taco, which packs 220 calories, 540 milligrams of sodium, 16 grams of carbohydrate, and 7 grams of protein. Add steak to up the protein content to 16 grams for a breakfast that really satisfies. “For fast food, this isn’t a bad option.”

“If you have a late-night [quesadilla] craving or you’re hitting the drive-through after a night out with friends, this is certainly respectable, with just 180 calories, 15 grams of carbs, and 12 grams of protein,” Kimball says. “The 540 mg sodium isn’t too terrible.”

Doctoring up your Taco Bell meal is half the fun, but some of the add-on options are better choices than others. Kimball’s picks: 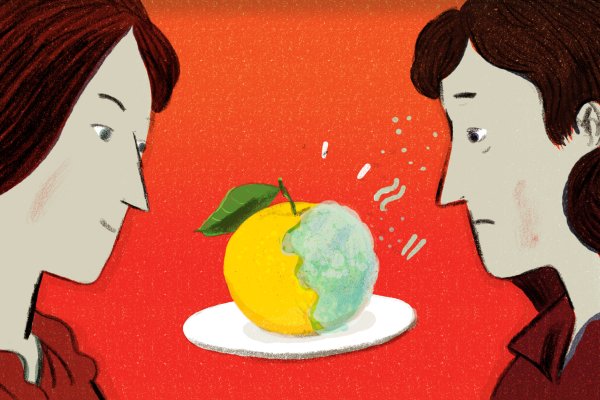 You Asked: Can I Scrape Mold Off of Food and Eat It?
Next Up: Editor's Pick