The backers of the failed effort to draft Sen. Elizabeth Warren into a presidential bid claim that they helped provide much-needed liberal arguments to the Democratic primary. But if Sen. Bernie Sanders’ campaign has its way, they may also provide some liberal staffers too.

The Vermont senator sees the now-defunct Run Warren Run campaign as an attractive talent pool as it ramps up its outreach efforts in Iowa.

Today, Sanders has only two paid staff in the first-in-the-nation caucus state. But his campaign plans to hire 25 to 30 organizers in Iowa by the end of the summer in addition to a wide network of volunteers, said Iowa campaign director Pete D’Alessandro.

And many of those staff and volunteers will likely come from the Run Warren Run campaign, a $1.25-million movement to try to convince Sen. Warren to run for president that was disbanded on Monday.

“It would shock me if we don’t wind up hiring some of the Run Warren Run people,” said D’Alessandro.

Run Warren Run, a joint effort by the liberal groups Democracy for America and MoveOn.org built a large infrastructure with a broad reach in Iowa, establishing two offices in Iowa and hiring nine full-time staff members there and in New Hampshire. The effort enlisted volunteers in every one of Iowa’s 99 counties and dozens of state representative and county Democratic chairs, but it announced on Monday it was dissolving after it became clear Warren would not enter the race.

It’s an attractive network of populists and organizers for any presidential candidate—“about as good a calling card for potential campaign staff as you might imagine,” said Ben Wickler, the Washington director of MoveOn.org.

The movement persisted for six months, despite repeated Warren’s repeated assertions that she would not run, and formally disbanded on Tuesday. The campaign spent $1.25 million on polls, office space, staff, videos and collecting the 365,000 signatures asking Warren to run. Both MoveOn and DFA raised their profile and membership during the campaign.

Warren and Sanders have much in common, as do their supporters. The two progressive senators from the Northeast have voiced strong opposition to the president’s plan for the Trans-Pacific Partnership, called for stronger Wall Street regulation and breaking up the big banks, and a renewed focus on income inequality.

“We’re going to have volunteers excited to do work for Bernie Sanders,” said Blair Lawton, the Iowa field director for the Run Warren Run campaign. Lawton added that some are likely to end up supporting Hillary Clinton and other candidates as well, but a substantial number of Warren’s well-organized crew already lean toward Sanders.

Sanders was in Iowa last week, and he gathered large crowds to his events in Muscatine, Davenport and elsewhere in the state. Campaign aides said attendance at every event outpaced expectations.

He has surged in Iowa polls and is the top pick of 16 percent of Iowa Democratic voters, triple his standing in January, according to a Bloomberg Politics/Des Moines Register Iowa Poll. That still puts him far behind Hillary Clinton, however, who is polling around 57% among Iowa Democrats.

D’Alessandro said he plans to build an Iowa operation “as good as better” than Clinton’s infrastructure in the state, though Sanders’ campaign staff recognize there will be fiscal limits compared with the much better-funded former Secretary of State. Sanders’ two Iowa staff members do not yet have an office.

Before announcing his run for president, Sanders’ held two dial-in calls with DFA members about policy issues, most recently on the Trans-Pacific Partnership. 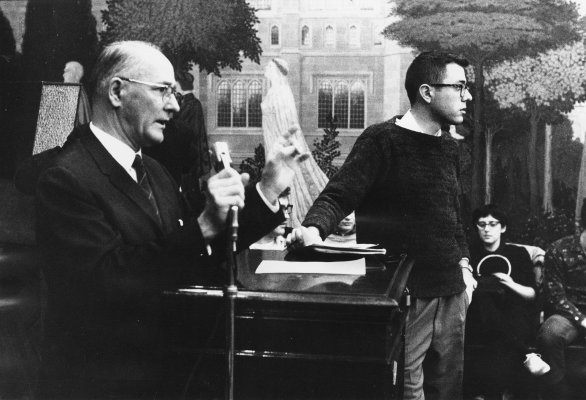 The Radical Education of Bernie Sanders
Next Up: Editor's Pick