Why the Mormon Church Finally Let Black Men Into the Priesthood

In the 1970s, the Church of Jesus Christ of Latter-day Saints had a problem. The priesthood—which, as TIME later explained, ” is not a clergy rank but a status achieved by nearly all male members”—was denied to black Mormons. The Church’s rules, which had been codified in the years before the Civil War, seemed increasingly out of step with the rest of America.

Despite increasingly loud calls to change the practice, the Church dug in for most of the decade. Shortly after athletes began to protest games with Brigham Young University, “Mormon elders reaffirmed their belief that blacks cannot be admitted to the priesthood,” TIME reported in 1970. The article went on to explain why that belief was so strongly held:

Amending that policy would take specific instruction from God, not exactly the easiest thing to come by—but it happened. On this day, June 9, in 1978, the Deseret News carried the breaking news that “every faithful, worthy man in the Church may receive the holy priesthood.”

“The church leaders said they had spent many hours in the Upper Room of the Salt Lake City Temple,” TIME reported the following week. “Eventually God ‘confirmed that the long-promised day has come.'”

Relatively few people were directly affected by the ruling—TIME estimated that about .025% of Mormons at the time were black—but it was still a milestone for the religion. Women, however, are still not eligible for the priesthood—no matter their race.

Read the full story from 1978, here in the TIME Vault: Revelation 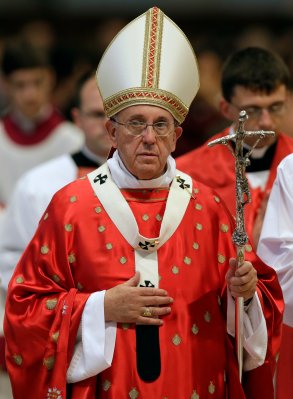 Pope Francis Hasn't Watched TV Since 1990
Next Up: Editor's Pick