The Next Step Toward Possible Conflict in the South China Sea

When discussing the growing conflict over China’s dredging new islands to extend its sovereignty 1,000 miles into the resource-rich South China Sea, one phrase frequently pops up from U.S. military officers past and present. “China,” they say, “doesn’t do off-ramps well.” What they mean is that once Beijing has decided on a course of action, it is rarely deterred from pursuing it. Given that—and the U.S. declaration that it will not allow China’s sand grab to stand—what’s next?

The chance of shots being fired now stand at better than 50-50, says Bernard Cole, a retired Navy captain and China expert. But he believes any initial volley would more likely come from the Philippines or Vietnam, who also dispute China’s expanding territorial claims, than Beijing or Washington.

“I see no flexibility in China’s position at all,” says Cole, now a professor at the Pentagon’s National War College in Washington, D.C. “I think China’s plan is just to have a fait accompli, gambling on where the U.S. threshold for reaction is.”

Defense Secretary Ashton Carter has made clear in recent days that the U.S. won’t back down, either. “There should be no mistake: the United States will fly, sail and operate wherever international law allows, as U.S. forces do all over the world,” Carter said Saturday at the Shangri-La defense conference in Singapore. “After all, turning an underwater rock into an airfield simply does not afford the rights of sovereignty or permit restrictions on international air or maritime transit.”

If the Chinese don’t halt their island-building efforts in the Spratly Islands, new U.S. military hardware will soon be showing up in the region to help them reconsider, Carter warned. He rattled off an incoming roster of weapons, including “the latest Virginia-class submarines, the Navy’s P-8 Poseidon surveillance aircraft, the newest stealth destroyer, the Zumwalt, and brand-new carrier-based E-2D Hawkeye early-warning-and-control aircraft.”

China didn’t seem to get the hint. “China and the Chinese military have never feared the devil or an evil force,” Admiral Sun Jianguo, deputy chief of staff of the People’s Liberation Army, said at the same gathering Sunday, a day after Carter spoke. “Don’t ever expect us to surrender to devious heresies or a mighty power.” Basically, the two sides spoke past one another at the weekend confab. “China is unlikely to stop its reclamation in the Spratlys,” William Choong, an Asian expert at the session, wrote afterwards. “In fact, the reclamation will continue.”

President Obama on Monday repeated his call for China to halt its island building. “We think that land reclamation, aggressive actions by any party in that area are counterproductive,” he said. “It may be that some of [China’s] claims are legitimate, but they shouldn’t just try to establish that based on throwing elbows and pushing people out of the way.”

U.S. officials say the UN Convention on the Law of the Sea bars what China is doing. “Artificial islands, installations and structures do not possess the status of islands,” the treaty says. “They have no territorial sea of their own, and their presence does not affect the delimitation of the territorial sea, the exclusive economic zone or the continental shelf.”

U.S. naval experts say that if the U.S. is going to back it words with actions, the U.S. Navy soon will have to send warships near the growing Chinese-claimed islands to show its territorial claims are worthless. U.S. Navy officials have said planning for such deployments is in the works.

But the South China Sea has a reputation as a ships’ graveyard. It’s shallow enough to sink them, as well as to enable dredging gear to expand existing islands. That limits the U.S. Navy to dispatching one of its new lightly-armed Littoral Combat Ships, or a flat-bottomed Marine amphibious ship, to poke around China’s islands, says retired Navy captain Jerry Hendrix, who spent much of his career in the Pacific.

The USS Fort Worth, a 4,000-ton, 387-foot LCS, recently sailed near the Spratlys, where Chinese vessels kept a close eye on her. “Routine operations like the one Fort Worth just completed in the South China Sea will be the new normal as we welcome four LCSs to the region in the coming years,” Captain Fred Kacher, commodore, Destroyer Squadron 7, said May 12 after the Fort Worth returned to the Philippines.

A bigger San Antonio or Whidbey Island-class amphibious warship would show the U.S. is serious, says Hendrix, now at the Center for a New American Security. “They’re large vessels with a very shallow draft,” he says, “and they also come with Marines.”

Hendrix believes the Chinese are trying to take advantage of a sense of U.S. wariness of overseas action. Chinese President “Xi Jinping has perceived the U.S. administration to have rolled over on Cuba, on the Iran nuclear deal, on Russia in the Crimea and Ukraine,” he says. The U.S. refusal to budge in the South China Sea may also offend some Chinese sensibilities. “There may be a perception, at least among their military, that there may be a cultural bias here: ‘Wait a minute, you’ll deal with the Persians, with the Latins, and with the Slavs, but you won’t deal with us?’ That could be another source of friction.”

Cole says he’d bet on an LCS deployment. “But if I were still a Navy planner, I wouldn’t send an LCS in there by itself,” he adds. “The LCS almost can’t defend itself. I’d have a couple of DDGs [destroyers] or some airplanes just over the horizon.” Cole doubts either China or the U.S. would fire a first shot. “But suppose the Philippines manages to get one of those two old Coast Guard cutters underway that we gave them and it ends up getting sunk by the Chinese?” he frets. “We have a mutual defense treaty with the Republic of the Philippines that very clearly includes Philippine warships.” 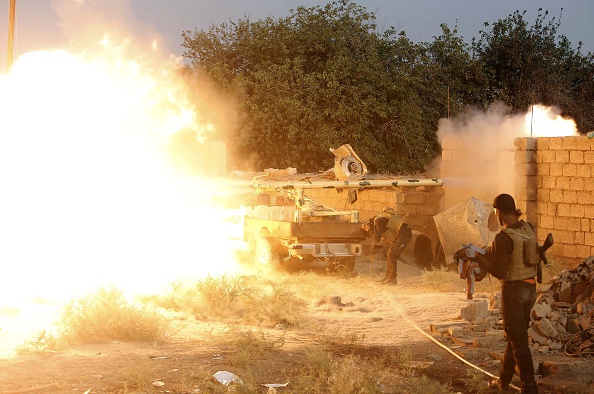 How Disbanding the Iraqi Army Fueled ISIS
Next Up: Editor's Pick