A year ago last month, China moved its oil drilling rig, the HD-981, into waters around the Paracel Islands. China’s exploratory drilling provoked a confrontation with Vietnam, which also claims the area. Both countries deployed coast guard vessels and fishing fleets to the drilling site. Ships collided and turned water cannons on each other, sinking a fishing boat. In Vietnam, the incident sparked popular protests; more than 20 people were killed.

The rig withdrew in July, after two months of drilling. But it left an unresolved question in its wake: Is competition over the South China Sea’s oil and natural gas resources a threat to regional security? This question resonates across the region, as the Paracel Islands are not the only area where hydrocarbon exploration could lead to clashes. In addition to its disputes with Vietnam, China is also involved in disagreements over resource authority with Indonesia, Malaysia, and the Philippines. Could these countries’ attempts to exploit oil and gas spiral into outright conflict?

The answer, happily, is probably not. The risk of regional “resource wars” has been overstated. Sure, hydrocarbon competition can inspire international spats, but as the HD-981 incident demonstrated, governments are quick to contain them.

When it comes to maritime disputes, islands, not oil, are the greater threat to international stability. Why? Because resources can be shared but islands cannot. In a winner-takes-all environment, leaders have little choice but to dig in their heels. If one country obtains sovereign control over contested territory, the other loses it. But through joint development, resources can be shared.

Over the last few decades, this difference has been particularly evident in the East China Sea. There, Japan and China are contesting control over a group of islands—known as the Senkakus in Japanese and Diaoyus in Chinese—along with oil and natural gas fields, over 100 nautical miles to the northeast of those islands. The dispute over the islands has generated intense hostility between the two countries. The struggle over oil and gas fields, by contrast, has inspired constructive dialogue.

That path to restraint, admittedly, hasn’t always been linear. Chinese oil companies began operating in the East China Sea in the late 1970s, where they made their first discovery, the Pinghu field, about a decade later. Pinghu’s development was uncontroversial; the field is almost forty miles west of where Japan draws its international boundary. In the late 1990s, Japan even co-financed the construction of pipelines from Pinghu to the Chinese mainland.

But friction increased as China’s search for hydrocarbons moved closer to the border. In 2003, oil companies set up a production platform above the Chunxiao gas field, one mile from the maritime boundary. Japanese authorities demanded access to the field’s geological data to ensure that China wasn’t siphoning off Japanese reserves. When the companies refused, Japan launched its own exploration program. A seismic survey ship was deployed to the border zone in July 2004. Beijing responded by sending in its navy. Surveillance ships harassed the survey vessel and, in November, a Chinese submarine was spotted in Japanese waters. Two months later, two Chinese destroyers moved into the contested area.

Yet, Japanese and Chinese authorities managed to contain the dispute. In October 2004, the countries launched a series of bilateral talks on the East China Sea issue. Four years of negotiations eventually produced an agreement to exploit hydrocarbon resources cooperatively in the border zone.

The agreement has not led to significant resource cooperation, but China and Japan have avoided further confrontations around the fields. This outcome stands in stark contrast to the dispute over the islands, which continues to provoke tensions, as yet unaddressed by bilateral agreements.

The Senkaku/Diaoyu dispute also emerged in the 1970s, when China started challenging Japan’s authority over the islands. It has gone through periods of escalation, as activists from both countries have attempted to land on the uninhabited islands to reinforce their governments’ territorial claims. In 1978 and 1996, Japanese nationalists landed on the islands and erected lighthouses, prompting diplomatic protests from Beijing and deployments of Chinese fishing boats. Activists from Taiwan and Hong Kong attempted their own landings, some of which succeeded, in spite of resistance from Japan’s Coast Guard. In 2004, activists from mainland China reached the islands for the first time.

These incidents did not spiral into militarized clashes. However, they provoked intense hostility and made the islands a flashpoint for nationalist sentiment on both sides. The populations of both countries were primed for further conflict—such as in 2012, when the Japanese government acquired three of the islands from private owners. In China, the nationalization was met with major anti-Japan protests. Beijing also retaliated by increasing its military presence in the area. Violations of Japan’s territorial waters skyrocketed from almost none to over seventeen per month over the next year. In November 2013, China declared an Air Defense Identification Zone (ADIZ) that included the islands.

In the last 18 months, violations have declined, but Japan is still reporting an average of eight per month. Japanese and Chinese officials have also made little progress towards resolving the island dispute. Last November, the countries jointly issued a four-point consensus, aimed at improving bilateral relations. One of the points addressed the Senkakus/Diaoyus, observing that China and Japan had “different views” of the situation, but would attempt to prevent it from escalating. Yet, Japan still refuses to acknowledge the existence of a dispute and neither country has offered concrete proposals for resolving it. Relations between Xi and Abe may be thawing, but a cooperative island agreement is a very long way off.

Chinese and Japanese officials are constrained by their countries’ shared history. The islands issue has acquired enormous symbolic significance in both countries, so attempts to reach a compromise settlement will provoke intense domestic opposition. Consequently, island disputes are likely to remain a thorn in government’s’ sides, persistently at risk of escalation.

Countries have many incentives to compete for authority in the East China Sea and South China Sea, including islands, oil and natural gas, fisheries, sea lanes of communication, and national pride. However, when it comes to inspiring conflict, not all causes are created equal. Hydrocarbon resources, alone, are not a significant threat to regional stability.

Emily Meierding is a Visiting Fellow at the Center for International Environmental Studies (CIES) at the Graduate Institute, Geneva. This piece was originally published in New America’s digital magazine, The Weekly Wonk. Sign up to get it delivered to your inbox each Thursday here, and follow @New America on Twitter. 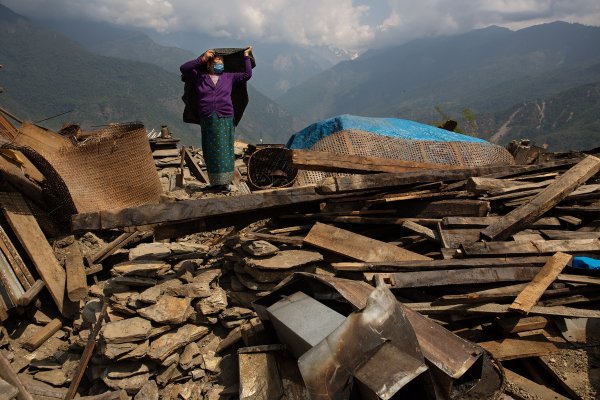 Why Women Should Lead Nepal's Recovery
Next Up: Editor's Pick