A Baltimore Police officer follows a man where a young boy and a 31-year-old woman were shot and killed May 28, 2015. In the month since Freddie Gray died and the city erupted in civil unrest, Baltimore has seen its murder rate skyrocket. There have been 38 murders in May alone.
Juliet Linderman—AP
By Josh Sanburn

Murders in Baltimore have reached the highest levels in 15 years, and the president of the city’s police union says it’s due to criminals feeling emboldened following the riots that broke out over the death of Freddie Gray last month.

“We’ve accomplished a lot of things over the last 10, 15 years and now we’re going backwards because the criminals are empowered,” says Lt. Gene Ryan, president of Baltimore city’s Fraternal Order of Police. “The criminal element is taking advantage of the crisis. They don’t believe there’s any recourse.”

On Thursday, two more people were found shot and killed in the city, the 37th and 38th homicides in May, the highest mark for Baltimore since November 1999. That spike in murders has coincided with a drastic decrease in arrests, which are down 56% compared with last year, according to the Associated Press.

The decline in arrests comes weeks after six police officers were indicted last month in the death of Freddie Gray, who died April 19 in police custody from a severe spinal injury. Gray’s death sparked riots in late April that damaged businesses and injured dozens of police officers.

Ryan says that many officers are concerned that mistakes on the force could get them indicted too. “Officers are afraid of doing their job,” he says. “They’re more afraid of going to jail than getting shot and killed right now.”

He added that he’s currently putting together a report based on officer interviews focusing on how the protests turned violent. 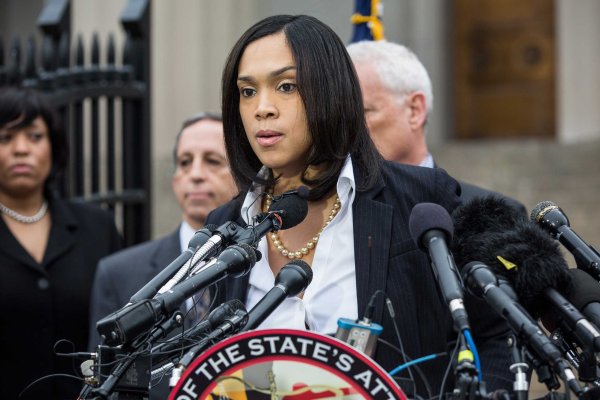