These Jobs Are Most Likely To Be Taken by a Computer

A man moves his finger toward SVH (Servo Electric 5 Finger Gripping Hand) automated hand made by Schunk during the 2014 IEEE-RAS International Conference on Humanoid Robots in Madrid on November 19, 2014.
Gerard Julien—AFP/Getty Images
By Benjamin Snyder / Fortune

Telemarketers’ jobs have the highest chance of being automated, according to recent report. Other positions with huge potential for being overtaken by robots? Cashiers, tellers and drivers, among others, according to this new NPR interactive.

While telemarketers have a 99% chance of one day being totally replaced by technology (it’s already happening), cashiers, tellers and drivers all have over a 97% chance at being automated. Many positions within the “production” category put together by NPR, including packaging and assembly jobs, tend to rank highly as well.

The job with the lowest shot at being overtaken by technology in the future? Mental health and substance abuse social workers. They have a 0.3% chance, according to the data. Occupational therapists also rank at 0.3%, while dentists, surgeons and nutritionists appear pretty safe at just 0.4%.

To play around with the complete data, check here. But beware, it’s pretty addicting. 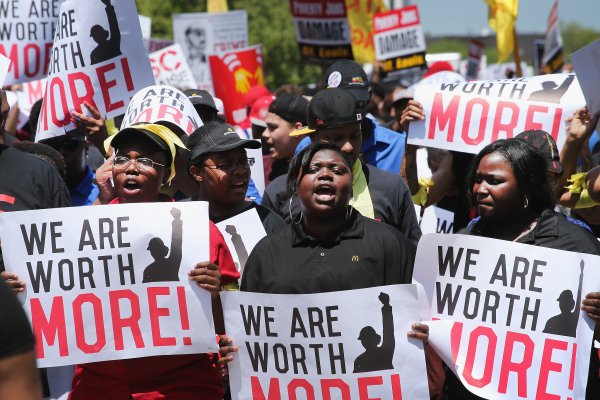 This Stat Is One Big Reason the Recovery Has Been So Weak
Next Up: Editor's Pick