It has put exotic ingredients like sea buckthorn and reindeer lichen on menus from Helsinki to New York, and forced many a professional kitchen to employ its own forager in order to collect the delicacies. It has made stars of chefs in a region that, culinarily speaking, was previously known only for the decidedly acquired tastes of pickled herring and salted liquorice. It has turned Copenhagen and Stockholm and Oslo and even Malmo and Are into objects of gastronomic pilgrimage. And it is the foundation from which one restaurant in particular has risen to be judged best in the world. But now, it seems, even the chefs who helped create it are ready to move beyond New Nordic cuisine.

On Friday, several Copenhagen chefs used the launch of a new platform for the local culinary community, called Aorta, to call for liberation from the very paradigm that has made them and their region the object of intense foodie devotion. “’New Nordic is no longer Copenhagen’s food agenda,” the text reads. “Tired of the ‘N-word,’ [these chefs] explore the possibility of a Post-Nordic style of gastronomy.”

That was fast: new Nordic itself is only eleven years old. In 2004, twelve chefs, led by the Danes Claus Meyer and René Redzepi, signed a manifesto in which they laid out principles for a regional cuisine. Individually, the measures weren’t revolutionary: to reflect the changing seasons in the meals they prepared; to base their cooking on ingredients particular to their climate, landscape, and waters, for example. But in a region where ‘fine dining’ had until then meant one thing — French — it sparked tremendous change. New Nordic chefs began forging a sophisticated, creative cuisine that relied heavily on wild plants, native fish, and indigenous meats. Banished were olive oil, lemon juice, and foie gras; in their place came sea buckthorn, musk ox, and mahogany clams dredged from icy Norwegian waters.

Spearheading the movement was Noma, which Redzepi co-owned at the time with Claus Meyers. When that restaurant opened in Copenhagen in late 2003 in an abandoned whaling warehouse, its mission was to create a truly native cuisine. Redzepi began by simply swapping local ingredients for the classics of French cuisine: musk ox for beef in tartar, beetroot for stone fruits in desserts. But a revelatory run in with a wild herb growing on a local beach (It tasted like cumin, he says. “I thought, ‘We are a spicy nation!’”) made him realize that there was a world of local flavors there for the discovering. His chefs began working with foragers to harvest wild plants and even insects and treated them as new ingredients. Eventually, by using fermentation and other techniques, they increased the range of locally-available flavors even more. It wasn’t always popular; early on, some in Copenhagen accused Redzepi and his chefs of being people who did unprintable things to seals. And it wasn’t even 100% local — Noma has always, for example, included chocolate among its desserts and served wines from France. But in the hopes of spurring creativity, Redzepi encouraged himself and his chefs to find inspiration in the landscape around them.

It worked. In the course of a few years, Noma won international acclaim and a well-earned reputation as one of the most creative kitchens in the business. In 2010 it took the first place ranking in the World’s 50 Best Restaurants; a position it would regain four times (the restaurant will learn on Monday night if it has managed a fifth victory).

And just as Noma took off, so too did New Nordic, at least as a brand. Some of the restaurants so labeled did indeed try to adhere to the principles outlined in the manifesto, Others, such as Christian Puglisi’s Relae in Copenhagen, interpreted things their own way, using ingredients — like olive oil — regardless of provenance if they made sense for the chef’s individual style or local circumstances. When he opened Chef and Sommelier in 2010 in Helsinki, Sasu Laukkonnen was committed above all else to using organic ingredients. “At first, I was just importing everything from France,” he recalls. “It was Rene who really turned my head to Finland — who said to me, look what you have her. So we started foraging and farming ourselves, and our food became much more personal and intense. But it’s not possible for an organic restaurant in Helsinki to use only local products, so I never considered us a New Nordic restaurant. But we get called that all the time.”

The identity helped restaurants in Oslo, Helsinki, Stockholm, and ever far-flung corners of Scandinavia like Skåne, Åre, and the remote Faroe Islands make names for themselves as well. “The label has done so much for our region, and everything that came after Noma’s success has been so important,” says Esben Holmboe Bang, chef of Oslo’s Maaemo . “Any chef who says that “new Nordic” didn’t have something to do with our success is lying.”

It’s even spread far from the actual region; New Nordic restaurants have opened in Barcelona, New York, Edinburgh, and Long Island City. But back home, in the actual Nordics, chefs are now chafing against the label. One restaurant’s culinary tics — desserts made from vegetables instead of fruit, three-word menu items utterly lacking in adjectives — have ossified into near dogma. And limitations once designed as a spur to creativity have begun to feel more like a straitjacket for chefs who want, say, to shave a bit of frozen foie gras atop their beets, or — God forbid — serve a tomato. “ When you go really Nordic, you get flavors that are very acidic, very green, lots of fermentation, lots of pickling,” says Matt Orlando, chef of Copenhagen’s Amass. “Those are great flavors, and we use them at the restaurant. But there are things from my past that I also like to use, that can round all that acidity and greenness out.”

At Amass, Orlando grows many of his own herbs, works closely with local farmers, and changes his menu sometimes daily to ensure that peas, for example, are only served when they are at peak deliciousness. “That’s the way people cook in France and Italy; the only thing different here is that it’s new to this region,” he says. “But why does that need a label? Why can’t you just call it ‘cooking?’”

One of the chefs behind today’s “Post-Nordic” text, Orlando himself worked for several years at Noma. But because he is American (and has worked at both New York’s Per Se and England’s Fat Duck) he has other experiences and flavors that he likes to bring into his dishes. And he is hardly alone. There are a number of non-Danish chefs in Copenhagen who came originally to the city to work at Noma, but have stayed to open their own places. “You have Victor (Wågman) and Sam (Nutter) at Bror bringing an almost French interest in fat to their cooking, and the guys at Taller who are cooking Venezuelan. That’s another reason the label isn’t accurate anymore.“

It may be inaccurate, but it’s certainly been powerful: A lot of money and attention have been made by the New Nordic brand. Culinary tourism in the area has shot up; by 2011, one in three of every tourists to Copenhagen said they planned to visit a specific restaurant. The Nordic Council, an intergovernmental agency, devoted over $3 million to supporting workshops and other initiatives under the rubric “New Nordic Food” in the last ten years. Not long ago, Vogue magazine published a “New Nordic Diet” (headline: Is Eating Like A Viking the Next It Diet?). You can also buy New Nordic shampoo, and even a New Nordic liver cleanse. “As a label, it doesn’t really have any meaning anymore,” says Bang. “It’s lost its way.”

As communications director for FOOD, an organization that promotes restaurants, producers, and agriculture in Denmark, Kasper Fogh started Aorta, the web magazine that published today’s protest, to “help spread the attention around a bit, to take some of what Noma has and get it to these young guys.” But perhaps one of the ironies of this situation is that few are more fed up with the New Nordic label than Redzepi himself.

Objecting to the way the phrase has become more marketing tool than meaningful signifier, he draws distinctions. “I don’t have a problem with ‘Nordic,’” he says. “It’s the only way to give a sense of place. But the ‘new’ in front of ‘Nordic’ should be erased, buried. I am so sick of that term.”

Although he got the chance to cook with soybeans and citrus while Noma was in residence in Japan earlier this year, Redzepi still maintains a regional-only ethos as a goal for his ingredients now that he is back home. But even he holds the future open. “We aim to only use regional ingredients because, you know the saying, the greatest catalyst to creativity is limitation? It made us more creative. But will it be like that forever? I doubt it, because we’ve already explored a lot. First we found new ingredients, and then we processed them in ways that developed new flavors. What comes after that? I don’t know.” He pauses, and laughs. “Maybe olive oil comes after that.” 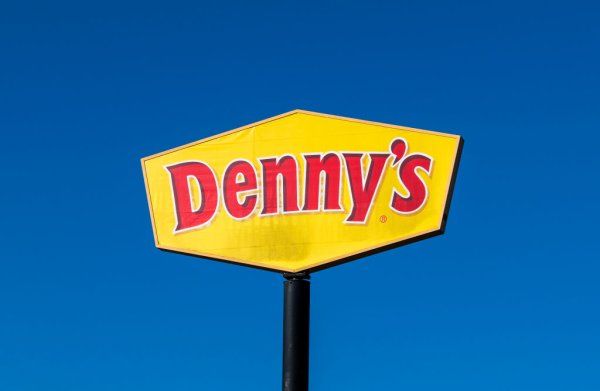 Work Up a Rage to This Video Proving Denny's Is the Unofficial Home of Punk Rock Mosh Pits
Next Up: Editor's Pick