The Death Toll From India's Hellish Heat Wave Is Now More Than 1,800

A rickshaw puller rests on a hot summer day in Kolkata, India on May 27, 2015.
Bikas Das—AP
By Rohit Inani / New Delhi

Ratna Devi is one of a dozen casual laborers working at a small construction site in the southern part of the Indian capital New Delhi, where her job is to help prepare a concrete mix. The work earns the 32-year-old a daily wage of 250 rupees or just under $4 — money that she uses to support her 7-year-old daughter. On Wednesday afternoon, as Devi went about her work on the site, her daughter fainted while playing nearby. The cause? A searing heatwave that has kept the maximum daytime temperature in the Indian capital above 100°F (40°C) for over a week now.

On Wednesday, the mercury topped out at 111.2°F (44°C). On Thursday, with temperatures hovering around 109.4°Fahrenheit (43°Celsius), Devi was back at work and her girl was once again playing near the site. For days now, authorities have been calling on people to avoid going out during the afternoon, when the heat wave is at its most extreme. But Devi simply can’t afford to stay indoors. “I can’t leave her alone because there is nobody to look after her,” Devi says. “I’m a single mother — I can’t stop working even for a single day.”

Forced to work under the blazing sun, construction workers like Devi, along with the homeless and the elderly, have been the hardest hit by the heatwave that so far has led to over 1,800 deaths, the vast majority of them concentrated in the southeastern Indian states of Andhra Pradesh and Telangana. Together, those states account for over 1,750 deaths. Deaths have also been reported in Delhi and other states, including Gujarat and Odisha, where temperatures earlier this week peaked at a sweltering 116.6°F (47°C). The heat is so severe that, on Tuesday morning, a local newspaper in the capital carried on its front page a picture of a pedestrian crossing on a main thoroughfare that had been disfigured, with its white stripes curled up, as the asphalt melted.

Already, hospitals in Delhi are “overflowing with heatstroke victims,” Ajay Lekhi, the head of the city’s medical association, told the news agency Agence France-Presse. “Patients are complaining of severe headache and dizziness. They are also showing symptoms of delirium,” he said.

Though the death toll so far this year is higher than that seen in 2014, India has witnessed severe heat waves in the past. In 2003, a heath wave led to 3,000 deaths in Andhra Pradesh. A similar number died in the same southeastern state in 2010, according to figures from state officials cited by the Wall Street Journal. The actual number could be higher, given the disproportionate impact on the most vulnerable.

Climate change has played a part in making heat waves in India more frequent and more severe, according to the country’s National Disaster Management Authority. It’s a point echoed in a report last year from the Intergovernmental Panel on Climate Change, which said that “higher daily peak temperatures and longer, more intense heat waves are becoming increasingly frequent in South Asia as a result of climate change.”

Meanwhile, with temperatures remaining high, power cuts are becoming more frequent, as the constant running of air conditioners strains the grid. In Gurgaon, for example, at satellite city just outside Delhi, residents were hit by outages lasting as long as 24 hours earlier this year, according to the local Indian Express newspaper.

The extreme conditions are expected to persist for several more days, as the country awaits the arrival of the annual monsoon rains, forecast this year to hit India’s southwestern coast at the end of the month. But even after the rains hit the Indian mainland, it will take weeks for them to spread out across the country and bring relief to the dry plains and other parts of the subcontinent.

The longer it takes, the more likely it is extract a heavier toll from the most vulnerable. “Summers are generally hot in the city but this year it is very hard for me to work in the heat,” says Devnandan Saha, a 52-year-old laborer in the capital, who was helping lay the foundations at a larger construction site up the road from where Devi was mixing concrete on Thursday afternoon. “But I have to work every day because the contractor refuses to grant even a day’s leave.” 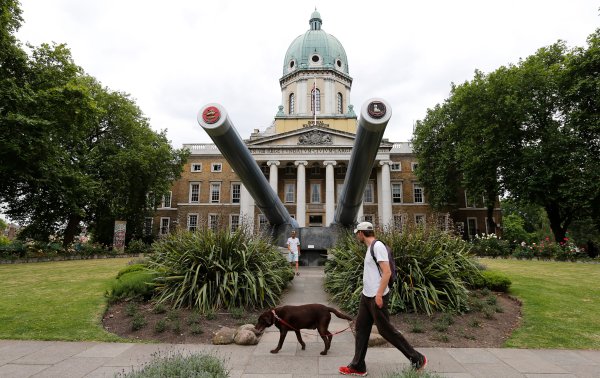 Rifle Linked to 7 Murders Found in U.K. Museum
Next Up: Editor's Pick