FIFA president Sepp Blatter’s 17-year reign as the strongman of soccer’s international governing body may be coming to an end soon, as authorities from across the sporting world continue to call for his resignation hours before officials cast their ballots in the federation’s presidential election in Zurich on Friday.

Blatter’s reputation has taken an absolute pounding in the past 48 hours, after the U.S. Justice Department unveiled an unprecedented corruption probe into the organization on Wednesday that has lead to the indictment of 14 of the association’s current and former executives, including nine senior officials.

As the investigation continues to make international headlines, public figures worldwide and civil society groups, from the likes of British Prime Minister David Cameron to Transparency International, have called on Blatter to step down.

“Sincerely, as someone who loves FIFA and its history, I am sickened, and I am vexed,” UEFA president Michel Platini told reporters on Thursday. “People don’t want [Blatter] any more as FIFA president, and I don’t want him any more either.”

The UEFA chief’s comments came as U.S. Soccer Federation President Sunil Gulati stated publicly during a press conference on Thursday that he would be casting his vote for Jordan’s Prince Ali.

Victor Montagliani, president of the Canadian Soccer Association, also came out this week in support of Prince Ali.

Despite the litany of voices calling for his resignation, Blatter appeared undeterred.

During a speech at the opening ceremony of FIFA’s 65th Congress in Switzerland on Thursday, Blatter tried to distance himself from the constellation of corruption allegations leveled at the federation.

“We cannot monitor everyone all of the time. If people want to do wrong, they will also try to hide it,” said Blatter.

The FIFA president went on to stress that the U.S.- and Swiss-lead investigations would be a “turning point” that would help clean up soccer’s ranks.

“More needs to be done to make sure everyone in football behaves responsibly and ethically — everywhere,” said Blatter. “Tomorrow, we have the opportunity to begin on what will be a long and difficult road to rebuilding trust.” 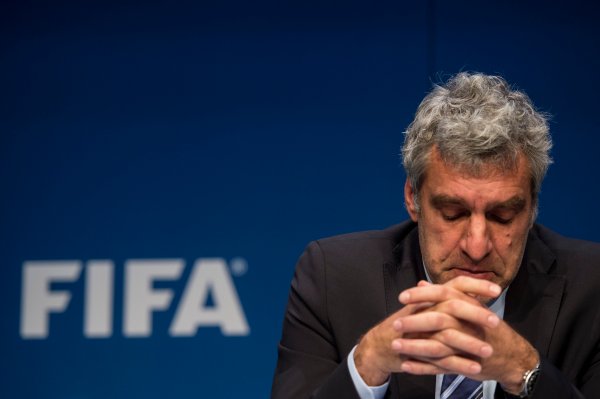