These Warthog Piglets Were Named After Game of Thrones Characters

Hodor is stocky and muscular with wrinkly, gray skin and a long, coarse mane. He also has four large tusks protruding from his snout and has not once said the word, “Hodor!” But we’re not referring to the Game of Thrones character — it’s a new baby warthog at the Detroit Zoo.

A set of five warthogs was born at the Detroit Zoo back in April, according to a news release, and they just made their web debut. There’s a good chance these guys will be popular, because each one is named after characters from Game of Thrones (or A Song of Ice and Fire, depending on your particular level of geekdom). The female piglets are named Daenerys, Sansa and Cersei, while the males are named after Tyrion and Hodor.

“We’re thrilled to have this new litter to add to our warthog family,” Scott Carter, chief life sciences officer for the Detroit Zoological Society, said in a statement. “Like all pigs, warthogs are smart and precocious and a lot of fun to watch running and rooting around in their habitat.”

Based on the video that the zoo shared on Wednesday, at least four of those piglets don’t share their namesakes’ blood-thirst or desire for revenge. The fifth one, presumably Cersei, isn’t in the video, undoubtedly because she doesn’t play well with others. 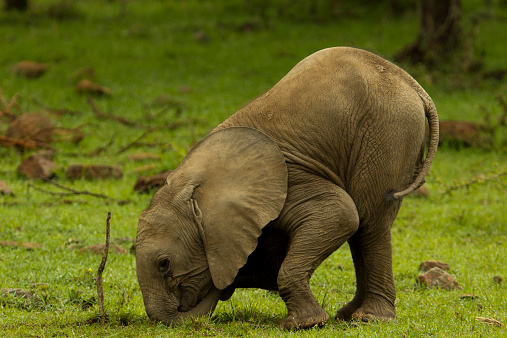 See What a Herd of Elephants Did When a Calf Collapsed in the Middle of a Road
Next Up: Editor's Pick