Pebble Time Is Long on Battery, Short on Features

The smartwatch is the company’s third product, but arguably the most significant thus far. It comes weeks after Apple launched its own smartwatch, and as Google gets ready to announce enhancements for its Android Wear platform (including possible iOS compatibility) that runs on smartwatches.

The $199 Pebble Time features redesigned casing available in red, white, or black. The smartwatch has a new color e-paper display that livens up the previously black-and-white screen, and also includes improved battery life. After thoroughly testing the smartwatch, its battery life fell to 20 percent after five days, which aligns with the company’s promise that one charge could last up to seven days.

A new mechanism also makes it possible to quickly change watch straps without special tools (a time-consuming task required for both smart and traditional watches). Previous Pebble users will be happy to hear the eight-app limit is no more and users can install as many apps (or watch faces) as they like.

The new Pebble Time operating system is full of fun animations and playful icons for various apps and information. It ran smoothly, even before last-minute bugs were ironed out via updates, during the review period.

However, the new Timeline feature is arguably the most promising aspect of the smartwatch. With the push of an up or down button (found on the watch’s side), information is displayed in chronological order and divided into past, preset and future events.

For example, past events include calendars, sports scores, and check-in’s from social networking app Swarm, while the present displays current events and alerts. Meanwhile, a future agenda features weather forecasts, and alarms (just to name a few). Users can select an entry to view more detailed information, or return back to the watchface after catching a glimpse of the day’s summary.

Unlike other smartwatches, Pebble Time apps push information straight to the Timeline without sending an alert to your phone. The benefits of this functionality became apparent during my time using the ESPN Pebble Time app. Despite not having the sports app installed on my smartphone, sports scores and updates were placed into the device’s Timeline. Select a team or game you want to follow from the app on the watch, and the alerts will follow.

Pebble’s Timeline is one of those features where you begin using it, and it doesn’t quite make sense at first. But, its value starts to shine through as more information is populated. Being able to press a button and view bite-sized morsels of information is of tremendous use for smartwatch users.

It’s imperative, however, for big name developers to take advantage of the new feature in order for Pebble to maximize the potential of its Timeline. ESPN is big, but not big enough on its own. The NYT Now app comes to mind as the perfect companion for a feature like this, as does Twitter.

The smartwatch lacks certain staples (such as voice notes, stocks apps, weather watchfaces and album art) found on other competitors’ devices, but future OS updates promise to fix that.

Regardless of its soon-to-be-fixed app setbacks the biggest obstacle facing Pebble is the shift in what smartwatches are capable of and what consumers now expect from them.

The one-way features Pebble was originally built-on have morphed into a two-way highway that has become the norm in the industry. Now information races between one’s smartwatch and smartphone just as often as it does going in the opposite direction. Raise your wrist to create a voice reminder on the Apple Watch with a “Hey Siri” command and watch it later sync across all of your Apple devices. It’s a similar feature that can also be achieved with “OK Google” if you’re an Android Wear user.

Unfortunately, the Pebble Time doesn’t allow you to create content, such as a reminder or compose a text message from scratch. The device basically acts as a smaller screen to view your notifications, and not much else.

Short of using your voice to reply to a message on an Android device, any interaction you have with the watch is strictly from a consumption standpoint, meaning sending any information to your phone from your smartwatch isn’t possible.

To its credit, Pebble has stated working on a method to allow iPhone users to reply to Gmail messages using dictation, but it’s not ready quite yet.

It should be possible for a developer—or Pebble itself—to create a smartstrap (you can read more about these straps in an earlier Logged In column) that contains a speaker. Using the Pebble Time’s microphone and a speaker located in the strap, users could then give commands to create alerts and send text messages. Alas, nothing like that exists right now; perhaps one day.

What the Pebble Time lacks in features, it makes up for in battery life. It still offers the core foundation of what a smartwatch once was, and for some, what it should be. I wouldn’t hesitate to recommend it to an Android user, thanks to the added functionality and notification management. I would hesitate, however, to give the same recommendation to iOS users, unless battery life and a budget (Apple’s smartwatches are almost twice as costly) are of the utmost importance. 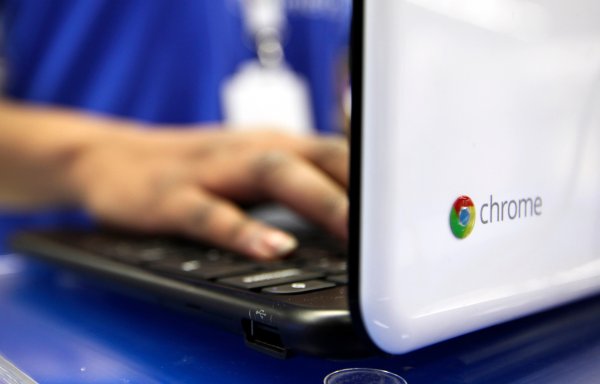 Ultra-Cheap Chromebook Laptops Are Killing it This Year
Next Up: Editor's Pick