Shania Twain on Her New Music: People 'Have Never Heard Me This Way Before'

After more than a decade, Shania Twain is getting ready to hit the road—for the last time. The Canadian pop-country superstar is coming off the heels of a successful two-year residency in Las Vegas, a confidence-boosting forum in the wake of the dissolution of her marriage to producer Robert “Mutt” Lange and her subsequent struggle with dysphonia, a stress-induced vocal disorder. Twain’s Rock This Country tour, which spans 67 North American dates from June to October, is her last live hurrah: a farewell to public performance doubling as a raucous, rock-oriented party, built around the songs that made her one of the biggest stars in the world at the music industry’s absolute financial zenith.

Twain is also working on new original material, the bulk of which will constitute her upcoming fifth full-length; her last studio album, Up!, was released in 2002. She’s been writing alone, a major shift after years of working in partnership with Lange—her last entirely self-penned song was released on 1995’s The Woman in Me — and the resulting material is more vulnerable and introspective than ever, though few people have had a chance to hear it yet.

Twain spoke to TIME about what she’ll miss about performing live, the challenges of the creative process, her influence on younger performers and the best advice Oprah ever gave her.

TIME: This is your fans’ last chance to see you live. What should they expect, and how will it differ from your Vegas show?

Shania Twain: The core of a Shania concert is obviously the hits, so they’re all there. But I’m going to focus more on the “rock” side of the songs’ production because the records are very guitar-heavy. The theme of the tour is “Rock this Country,” so it’ll be loud and the guitars will be featured more. It’s going to be a visually exciting show, and very different from Las Vegas.

You’re making adjustments to feature the guitars more. Have you made other adjustments to accommodate changes to your voice over time, or your dysphonia?

It’s primarily just preparation for the show. I have a routine now that warms me up for the show and warms me down afterward. It takes me an hour and a half to get ready for the show now, vocally. That’s been the biggest adjustment. I used to just be able to hop on stage with no warmup at all and didn’t need any recovery time.

Is there a song that you didn’t get a chance to perform a lot in Vegas that you’re thinking of bringing out on the tour?

I’m going to do a more rock-oriented version of “Party for Two” that I’ve never done live, so that’ll be an entirely new song there. And there are some songs that I did as part of an acoustic set in Vegas that I miss doing as a full band production, so they’re going to go back into the show as full songs and I’ll take them out of the acoustic realm. One of those is “Rock this Country”: we only did a snippet of it on acoustic instruments in Vegas, so we’re going to take it back to its full glory. There are a few more like that where I really want to do the fully produced versions now.

You’re more than two decades into your career and you’ve been touring and performing for a long time — what’s one thing you’ve picked up over the years you wish you could tell your younger self to save some headaches?

I was always very mature and assured of myself when I was younger. I think I did pretty much everything right when it came to touring, I was always very serious and focused on my voice and preserving my health, so I’d probably tell myself, “You don’t have to be so serious.” I’d say, “Have more fun.”

What will you miss most about performing?

The people. That’s the key for me when I’m up onstage—watching their reactions, interacting with them myself. I like people, and I like communication.

You’re still working on a new album—your first since 2002. How’s that going?

I’m getting close to the end of the songwriting. I’m never at the end of songwriting, of course—I’m songwriting all the time—but I’ve got more than enough for the new album. I’ve got too many songs, in fact, so I’m going to have to make some tough decisions on which songs don’t get on the album. It takes a bit of discipline to not start writing new songs and to focus on the current ones because I love starting new songs.

What’s been the most challenging part of writing these songs entirely on your own, as opposed to with a partner?

The most difficult part hasn’t been writing them—it’s been sharing them. I was OK on my own just writing and indulging in my own emotions and feelings, and not having anybody directing me; I’ve enjoyed that independence. But when it came time to start sharing with other creative people for the sake of making the album, I was really insecure about that and felt very vulnerable. All of a sudden, I was concerned about their perception and what they thought. That was a bit of a hump—I was very nervous about it—but it turned out really well. Everybody loves the music and is into the songs, and that gave me new confidence to carry on writing and handle everything myself.

What about this new batch of songs is going to surprise people?

They’ll be a bit of a surprise stylistically, because the songs come out different when I’m writing by myself as a singer-songwriter. They’re a little less predictable. They’re not as structured as some of my earlier stuff. The lyrics are positive but maybe they’re not as fun as they were once—they’re a little bit more introspective. I think they’re still relatable, and that’s important to me, I like when it’s therapeutic for everybody, for both me and the listeners, and we all get to share the things we have in common that we go through every day in life. Maybe it’s just more mature. I don’t know. It’s hard for me to put my finger on it because I’m not terribly objective at this point.

I’m a different person now. I’ve evolved, and a lot of things have happened, and I think that’ll be obvious in the music. When people hear it, they’ll understand and they’ll relate. It’ll be soothing: they’ve followed me all these years, and I think they’ll understand the transiting from what I was writing then to what I’m writing now. I don’t think that’ll surprise anybody. I think it’s more than they’ve never heard me this way before, and that’ll be refreshing. These songs are from their own vein.

When you’re in the middle of the creative process and working on new stuff, do you ever feel the temptation to share it when you’re out on tour? Especially since this is going to be fans’ last chance to hear you perform in a live setting.

I do. The timing was meant to be different, and that was something I just couldn’t predict. The intention was for the album to be further along—I was hoping that during the two years in Vegas, I would be able to get a lot more done on it. And then that would’ve allowed me to include some of the new music from the record on this tour, because the record would’ve been finished by then! I had to set new goals, and now maybe at the end of the tour I’ll be able to bring one or two new songs in, that would be a bit more logical. The timing just wasn’t ideal. And I didn’t want to shut down for too long and then say, “OK, well, I’ll wait to tour until the album is finished,” because then I think I would’ve lost the momentum to tour, and I didn’t want to do that. Yes, I’d like to be able to introduce one or two songs on the tour. I do think people like to hear things they know—they don’t necessarily want to sit through your new stuff. There might be room for one or two.

There are a lot of female country singers, like Taylor Swift and Miranda Lambert, who seem to be following in your footsteps—experimenting with pop and really owning their femininity. What do you make of that?

They’re very sweet and they refer to me, they refer to my music, they refer to the influence. It’s nice when somebody in front of you breaks down barriers, because then you can feel more liberated—it takes the pressure off. I can see how they would experience that and say, “Wow, I feel a little more courageous now that someone else has done it before me. I can be more expressive and more true to myself and less worried about the criticism.” I think that’s a big part of it. You have to have the courage to take the risk. I think for those girls, coming after me, there was less risk and that must’ve been a very liberating experience. For me it was a total risk, but I was completely willing to take it. There’s no doubt it was a very sensitive period.

What’s a song or an album that you’ve been listening to a lot lately?

I’m really liking MAGIC! I’ve been listening to them a lot lately. They’re very refreshing, they’ve got that reggae influence and they’re fun but they’re serious, they sound good, they’re a good band, and they write good songs. That’s kind of my newest discovery. Matthew Koma was a really wonderful discovery that I heard about through a friend. I like his acoustic stuff and I also like the dance stuff that he does. And I listen to a lot of old stuff too, I listen to a lot of classic things. I love Sia. She’s an amazing singer and a great songwriter.

Oprah is famous for her wisdom and advice, and you once filmed a docuseries for the Oprah Winfrey Network. Did she give you any trademark Oprah advice?

I don’t think she ever gave me any advice! She’s just a very encouraging person, and her communication is always uplifting. I guess that’s what I take from her—just her level of encouragement.

That must mean you have it all together! She’s saying, “You’ve got this. You don’t need my help.”

Exactly! I hope so. 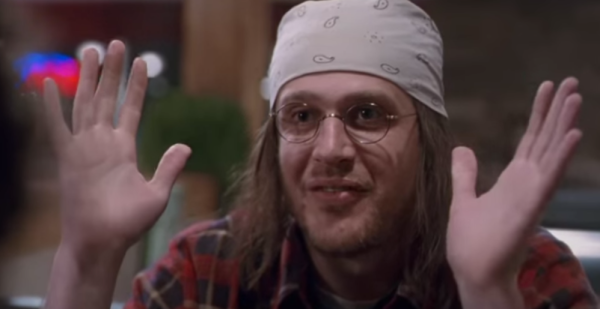 Watch Jason Segel in the Trailer for The End of the Tour
Next Up: Editor's Pick