FIFA spokesman Walter De Gregorio gives a press conference at the FIFA headquarters in Zurich on May 27, 2015
Fabrice Coffrini—AFP/Getty Images
By David Stout

Swiss officials rounded up seven leading soccer officials in Zurich on Wednesday morning as a part of an operation that will likely see the suspects extradited to the U.S. on corruption charges, reports the New York Times. The arrests come just days ahead of the 65th congress of the sport’s global governing body FIFA, which is scheduled to commence in the Swiss city on Thursday.

Federal prosecutors in Switzerland have opened criminal proceedings related to the awarding of the 2018 and 2022 World Cups, and said they have seized “electronic data and documents” at the FIFA headquarters as part of the investigation. Police officials said 10 executive committee members who took part in the 2010 votes will be questioned. The U.S. Department of Justice has also unveiled an indictment against nine FIFA officials, including vice presidents Jeffrey Webb and Eugene Figueredo, and five corporate executives for racketeering conspiracy and corruption.

The soccer organization has been long bedeviled by rumors of graft, especially relating to World Cup bids and broadcast rights.“We’re struck by just how long this went on for and how it touched nearly every part of what FIFA did,” an unidentified law-enforcement official told the newspaper. “It just seemed to permeate every element of the federation and was just their way of doing business. It seems like this corruption was institutionalized.” 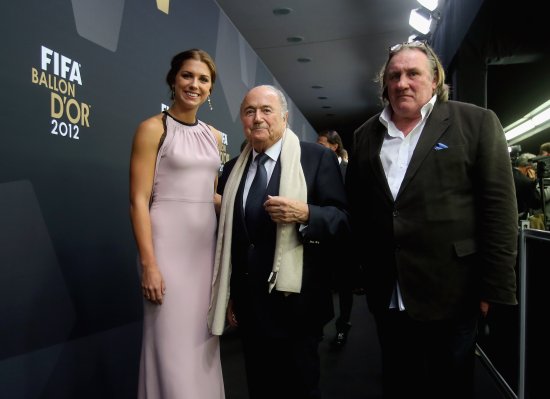 Soccer Star Alex Morgan: Sepp Blatter Didn't Know Who I Was
Next Up: Editor's Pick