Ireland’s recent referendum approving same-sex marriages has drawn sharp condemnation from a senior Vatican official, who described it as “a defeat for humanity,” the Guardian reports.

“I was deeply saddened by the result,” said the Vatican’s Secretary of State, Cardinal Pietro Parolin, on Tuesday. “The church must take account of this reality, but in the sense that it must strengthen its commitment to evangelization. I think that you cannot just talk of a defeat for Christian principles, but of a defeat for humanity.”

Parolin is regarded as the highest official in the church hierarchy after the Pope. His hard-line stance will be greeted with dismay by Catholics hoping for a softening in the church’s position on homosexuality. They come after the Vatican’s recent refusal to accept a gay Catholic, Laurent Stefanini, as France’s ambassador to the Holy See because of his sexuality, the Guardian reports, citing French and Italian media.

This month’s Irish referendum saw 62% of voters coming out in favor of marriage equality for gays and lesbians. 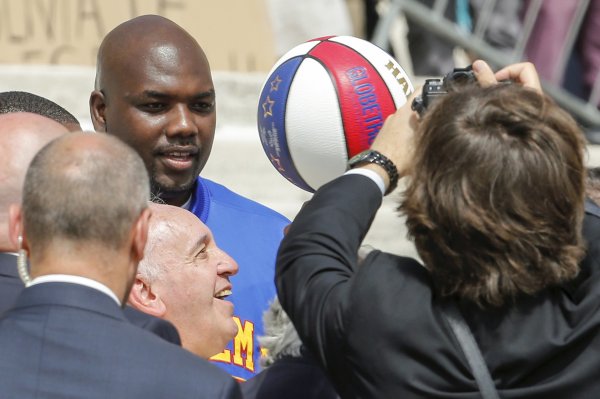 Pope Francis Meets the Harlem Globetrotters
Next Up: Editor's Pick