“The investigative report makes clear that some members of the KDR chapter promoted a culture of harassing behavior and degradation of women,” said Damon Sims, the university’s vice president of student affairs. “We must respond accordingly, and we hope by doing so it is clearly understood that our university will not tolerate such actions.”

Police had begun investigating in January after a former member reported the private Facebook page to authorities. After the accusations became public in March, Penn State announced it would review its Greek system, while the national office of Kappa Delta Rho suspended the chapter for a year. Hundreds of students and supporters launched protests against the fraternity, urging the administration to take more substantive action at sexual assault on campus. 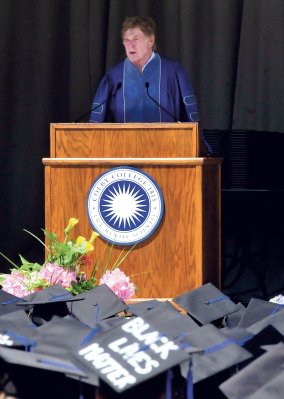 Robert Redford to Grads: 'Don't Be Afraid to Take a Risk' in a 'Rough' World
Next Up: Editor's Pick