How to Bridge the Generational Gap and Succeed at Work

Penguin Random House
Ideas
By Jo Piazza
Jo Piazza is a writer, editor, and co-author of The Knockoff.

I’ve been the youngest person in the room. I’ve been the only one in jeans and a hoodie while everyone else wore power suits. I laughed when someone mentioned a fax.

I’ve also been the oldest. I have been completely left behind during a conversation about the benefits of Meerkat versus Periscope. I once had to ask what Tinder was.

I’m almost 35, which means I straddle that weird line between Generation X and millennial. I recently wrote a novel with former-magazine-editor-turned-techie Lucy Sykes, who is 45, about this generational divide in the workplace.

Our book The Knockoff has been called The Devil Wears Prada meets All About Eve meets Silicon Valley, and it tells the story of fashion magazine editor Imogen Tate (who is in her forties) who sees her magazine turned into an app when her young assistant Eve (who is in her twenties) becomes her boss. Even as Eve tries to strong-arm Imogen out of her job, Imogen meets incredible young women in tech who help her bridge the generational divide.

In some ways the book mirrored Lucy and my real relationship. Lucy couldn’t figure out how to edit the documents that I would send her over email. But we figured it out. Lucy paid her 11-year-old son to teach her to use her iPad. We both learned to speak the universal language of emoji. We got over it. Here’s some advice for others in similar situations.

For the younger generation:

1. Show. Don’t tell. Your older boss may think you’re goofing off and wasting time on your phone and social media. They might not understand that you can communicate with clients over text message and search for ideas on Twitter, Facebook, and Instagram. I once had an editor ask me to reprimand an employee because she “never picked up a phone” and was “on her Gmail all day.” She was just using Gchat as her primary mode of communication. Show your boss how you use new tools and platforms so that your boss knows they are a part of your daily work flow.

2. Listen with respect and ask questions. Your older coworker has been working in this industry for so long for a reason, and they have years of institutional knowledge. You can learn from them. Asking questions doesn’t just help you learn, but it also makes your coworker feel valued.

3. Switch up how you communicate. Pick up the phone. Sometimes a phone call will accomplish so much more than a text message. Nuance is lost in text, and a smiley face does not convey tone. If you want to have a healthy working relationship with your older colleagues, make that phone call or pop over to their office. Keep the acronyms to yourself, and let them dictate the kind of language you use.

4. Be patient. The older generation went into their careers thinking they would stay in one place for a long time. That is no longer the case. You may be itching to move up the ladder and onto the next big opportunity, but sit back for a bit, take a deep breath, and don’t let that ambition and eagerness overwhelm you. Sometimes it can be taken the wrong way.

5. Be polite. We know you have manners. But sometimes manners are lost over text and email. It’s worth using pleasantries like “Dear X” and “Sincerely” in emails.

For the older generation:

1. Your next mentor may be younger than you, and that’s OK. When I used to think about a mentor, I thought about Oprah, Gay Talese, and Barbara Walters—all people who were older than I was. But now I look at women in their twenties who are fierce business women, and I think Lauren Conrad or Leandra Medine of the Man Repeller could be my next mentor.

2. Adapt. The old ways aren’t necessarily better; we have just been doing them longer. Sometimes it’s necessary to adapt, or risk not making it in the industry.

3. Ask for help. Ask your kids. Ask your nanny. Ask those geniuses at the Apple store. Half the battle is knowing what to ask so you can level the playing field.

4. Compromise. Be prepared for change, and be ready to embrace new ideas from this new generation of business leaders. Accept that you are not always going to be right. 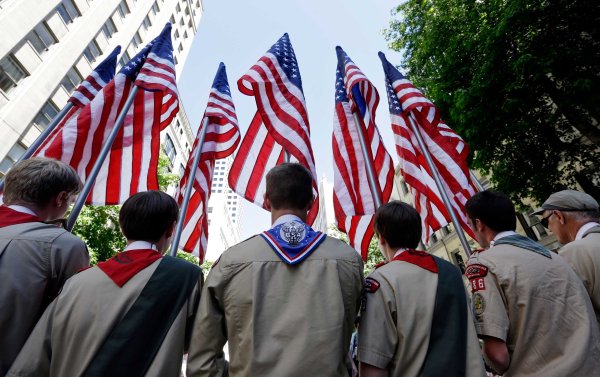 I Am a Gay Boy Scout: The Policies Remain Wrong
Next Up: Editor's Pick