“[This bit] came out of a need to find another piece of ourselves [for our act],” Jerry Stiller said of this clip of he and wife Anne Meara performing the bit for comedy shows hosted by Johnny Carson and Ed Sullivan. “We were running out of ‘tall woman and short guy.’ ”

“Jerry, it came out of a need because we had a date on Sullivan like in a week and a half and we had to have a sketch,” Meara corrects him.

That exchange, part of an interview with the Archive of American Television, captures Stiller and Meara’s chemistry wonderfully, as does the bit they’re talking about, a riff on computer dating that sees the tall, Irish Catholic Meara’s character Mary Elizabeth Doyle matched with Stiller’s “Hershey Horowitz.”

“We wrote every one of those sketches for that show between the two of us” Stiller continued, talking about the pair’s run on Sullivan. “Broke up the marriage, almost,” he continues jokingly.

“Our children became estranged from us,” Stiller adds.

Meara died Saturday at the age of 85. The trailblazing comic is survived by Stiller, their son Ben and their daughter Amy. 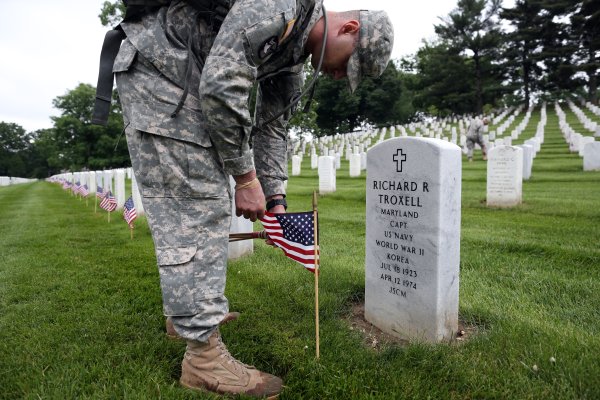 See 228,000 Flags Planted for Memorial Day in 1 Minute
Next Up: Editor's Pick