Renecia Hall, left, and Kristen Martin, right, wait for their marriage license from Rev. Bill Freeman during their wedding ceremony at the Harbor Unitarian Universalist church in Muskegon, Mich., on Saturday, March 22, 2014.
Natalie Kolb— The Chronicle/AP
By Denver Nicks

Michigan will not recognize more than 300 same-sex marriages that took place over the weekend, Gov. Rick Snyder said Wednesday, a blow to couples who were married after a court overturned the state’s gay marriage ban but before an appeals court stayed that ruling.

Snyder acknowledged that the marriages, which took place on Saturday between the time the law was struck down and the federal appeals court stayed that decision, were legal at the time they were officiated. But, he said, they won’t be recognized by the state until the appeals court rules on the lower court’s decision overturning the state’s 2004 constitutional amendment banning same-sex marriage, a process that could take months.

“The couples with certificates of marriage from Michigan courthouses last Saturday were legally married and the marriage was valid when entered into,” Snyder said in a statement. “Because the stay brings Michigan law on this issue back into effect, the rights tied to these marriages are suspended until the stay is lifted or [the lower court’s] decision is upheld on appeal.” 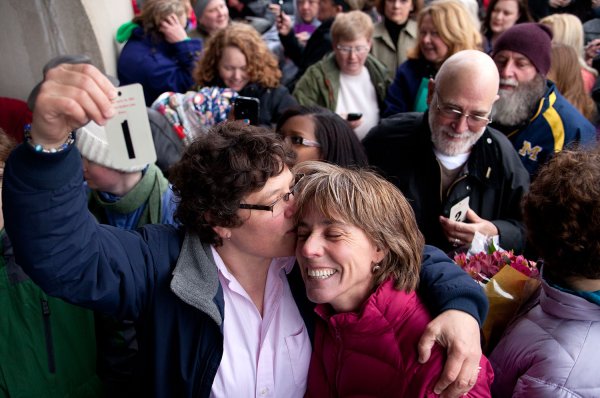