Migrants Find a Safer Route Into Europe via the Balkans

Migrants sleep in a park near the main Belgrade's bus and train station, Serbia on April 24, 2015.
Marko Djurica—Reuters
By Rebecca Collard / Belgrade

When Abu Hassan fled the Syrian city of Daraa two months ago he was determined to get his family to Europe. He considered putting his family in a boat in Libya to cross the central Mediterranean Sea.

“I decided it’s too dangerous. Not with the children,” says Abu Hassan, who is now sleeping in a park with eight of his family members in the Serbian capital, Belgrade.

Instead, they made their way to Turkey, took a short boat trip to Greece and then paid smugglers to take them through Macedonia, stuffed in the back of a truck with 190 other migrants and refugees, to the Serbian border.

“At midnight they dropped us near the border and said ‘it’s there, go,’”recalls Abu Hassan. They were in Serbia for just 10 minutes when they were picked up by the Serbian authorities, but they were safe. They were told to register at a nearby office an office, which they did before heading north.

The most popular route into the European Union is by boat from Libya across the central Mediterranean, but this year alone an estimated 1,500 people have drowned in the choppy waters off the North African coast.

“It has always been a very dangerous trip,” says Ewa Moncure, a spokesperson from Frontex, the E.U. border monitoring and patrol. “It seems now, that the people traffickers can operate freely in Libya. As soon as they have boats, they send people to sea…some make it and some don’t make it and [the traffickers] don’t seem to care.”

Now, tens of thousands of migrants and refugees — desperate to escape violence and poverty at home — have opted for this safer Balkan land route through the former Yugoslavia and into the E.U. through Hungary. Last month alone 7,000 migrants and refugees — primarily from Syria, Iraq, Afghanistan and Pakistan — crossed the frontier between Serbia and Hungary, according to Frontex. Last April, just 900 crossed there.

Abu Hassan doesn’t want to use his legal name fearing it will hinder his chances of reaching his final destination, Germany. Most migrants who take this route are trying to get to northern Europe. Both Greece and Hungary are in the E.U. but have high unemployment and offer little assistance to refugees and migrants.

In a café near the park, dozens of young men sit speaking Arabic and Afghan languages, and some Africans converse in French. They talk to their families at home and try to arrange their journeys north to the Hungarian border.

“Most of the smugglers are Pakistanis and Afghanis,” says 25-year-old Mahmoud, who also doesn’t want to give his full name. He sits with a group of Syrians and Iraqis and they debate the best route into Hungary.

Mahmoud spent one month in a Syrian government prison in his native Aleppo. The day after he was released he paid smugglers to take him to Turkey where he had to decide which route to take to Europe.

“Two of my friends died in the sea trying to reach Italy,” says Mahmoud. Both were young men who traveled to Libya. They called home one day about a year ago and told their parents they were boarding a boat to Italy. “Their parents told them ‘good luck’…We never heard from them again,” he says.

Stories like this dissuade some migrants from taking the sea journey from Libya but this route through the Balkans is also more expensive, costing several thousand dollars in smuggling fees and transport. Once in Belgrade, some rent shared hotel rooms or sleep in parks and spend their days waiting in cafés.

The Serbians seem to turn a blind eye to the migrants as if they want them to move on to Hungary as quickly as possible. “Really, the Serbian police don’t want to catch us,” says Mahmoud. “They don’t want us to stay here.”

He echoes the speculation of many here that the Serbian police often look the other way as people attempt to cross into Hungary, making this frontier a weak link in the perimeter of fortress Europe. Rights organizations have also documented Serbian authorities forcibly returning migrants to Macedonia, refusing to allow them to register asylum claims as well as extortion and physical abuse.

While this route might be safer than a “10-meter rubber boat with a 100 people onboard,” in the Mediterranean Sea, Moncure, from Frontex, cautions that it’s not completely safe. And as more and more people take this route through the Balkans, and smuggling becomes increasingly profitable, vulnerable migrants are at risk of exploitation and abuse. Migrants tell stories of being lied to and abandoned by traffickers and taxi drivers, others repeat tales of kidnapping by smugglers who call their families demanding more money to release them.

“The people smugglers aren’t doing it for free,” says Moncure. 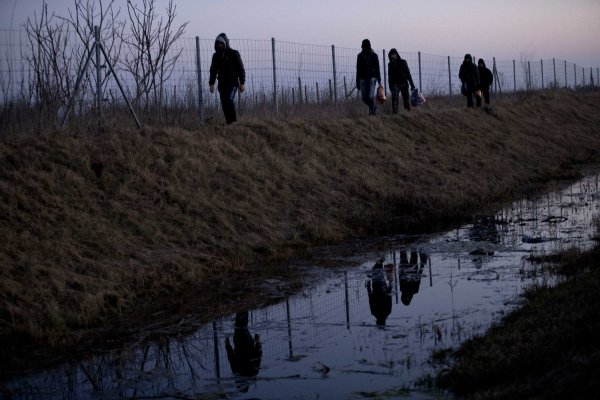 See Migrants Make Their Way From Serbia to Hungary
Next Up: Editor's Pick