Watch This Stunning Video of Astronauts Docking at the Space Station

Commuting to work isn’t easy in space. After Scott Kelly, Gennady Padalka and Misha Kornienko blasted off from Kazakhstan aboard their Soyuz spacecraft in the early morning hours of March 29, it took them six hours to reach the International Space Station.

Six hours doesn’t seem like much—barely a flight from New York to London. But New York to London is a trip of only 3,459 miles (5,567 km). The Soyuz crew had to make four complete revolutions of the Earth–putting a cool 100,000 miles (161,000 km) on the odometer, in a high-speed chase that, at the end, turned into a delicate pas de deux.

NASA has now released the video footage of the final 15 minutes of that approach, shot from the cockpit of the Soyuz. The clip has been sped up here to just two and a half minutes, but even at that rate, it reveals what a precision job a rendezvous and docking is.

The spinning object in the foreground of the image is the Soyuz’s docking radar. The red light that flashes in the window midway through the clip is a reflection from the camera that is recording the approach. What you can’t see are the crewmembers, both in the Soyuz and aboard the station, who were responsible for the cosmic choreography. Their work has to speak for itself—and that work was remarkable. 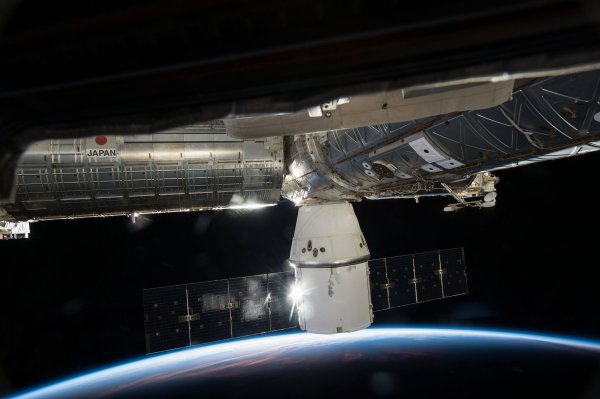 Watch the SpaceX Dragon Leave the Space Station
Next Up: Editor's Pick