Why Chechens Are Fighting Chechens in Ukraine's Civil War

Muslim Chechen men, who fight alongside pro-Russian rebels, pray near a checkpoint in the town of Zugres, Eastern Ukraine, on Jan. 11, 2015.
Mstyslav Chernov—AP
By Simon Shuster / Lysychansk

The Chechens arrived at about the same time on both sides of the war in eastern Ukraine. On the side of the Russians, they came last spring with no insignia on their uniforms, crossing the border into the rebel-held territory of Ukraine and taking up positions around the city of Donetsk. General Isa Munaev, by contrast, arrived on the opposite side of the front lines with a suitcase full of insignia – military berets, pins and flags bearing the symbol of Chechen independence: a wolf in repose above nine stars, each representing one of the major clans, or teips, of Chechnya.

His arrival opened one of the odder dimensions of the conflict in Ukraine. This sovereign country, which has more than enough of its own internal divisions and rivalries, has become host to a foreign conflict of Chechens versus Chechens that has been simmering elsewhere for more than a decade.

Adam Osmaev, the commander of a battalion of Chechens fighting against Russia-backed rebels, in Lysychansk, Ukraine on March 2, 2015.
Olya Engalycheva—AP

Regardless of the peace process now easing the broader war in Ukraine, this narrow struggle is likely to continue as long as the opposing sides from Chechnya have the chance to meet each other in an active conflict zone. “It’s like a blood feud,” says Adam Osmaev, one of the key Chechen commanders participating in the war. “Politics can’t stop it.”

The feud that split Chechnya, a tiny nation of highlanders who mostly adhere to a moderate strand of Sunni Islam, began around the year 2000, when they were fighting their most recent war for independence from Russia. Under the command of President Vladimir Putin, the Russian air force systematically bombed the rebellious province into submission that year, and with no air defenses to fight back, Chechnya’s rebel leadership was broadly divided between those who grudgingly accepted Russian rule and those who kept up a guerrilla-style insurgency.

Gen. Munaev was among the latter. By his own account, he remained in Chechnya for more than five years after the war’s official end, actively participating in the resistance even as his fellow fighters turned to the use of assassinations, sabotage and terrorism in their attacks on Russian and loyalist forces. All too often, civilians were caught in the conflict, especially as Chechen rebels turned to the use of suicide bombings and took innocent hostages. In 2006, during a counter-insurgency strike in Chechnya, Munaev was gravely injured – sustaining, as he later recalled, 36 shrapnel wounds. His comrades then smuggled him through Ukraine to Europe to seek treatment, and he received political asylum in Denmark soon after.

By that point, Chechnya was firmly under the control of a young warlord named Ramzan Kadyrov, whom Putin had entrusted in 2004 to stamp out what remained of the local insurgency. The result was a vicious internecine struggle. A brawny boxing fan with a private zoo full of carnivores, Kadyrov oversaw the hunt for rebel leaders in the mountains of Chechnya and allowed no resistance to Russian rule, often referring to Putin as a kind of surrogate father. Even in exile, Kadyrov’s enemies would often wind up dead – some assassinated in Europe, others in Turkey or Dubai – even though Kadyrov denied personally ordering their murders.

The exiled Munaev seemed undeterred. Having recovered from his injuries in Denmark, he set up a political activist group to campaign for Chechen independence, and he stubbornly renounced any Chechen who agreed to talk of reconciliation with Kadyrov or his representatives. “This war never ended for us,” says his close friend and associate in Denmark, the exiled Chechen statesman Ilyas Musayev. “The thought of any contact with those who have betrayed Chechnya, who have killed their own tribesmen, causes a Chechen terrible pain,” Musayev told TIME during an interview at his apartment near Copenhagen in late 2009.

He conceded, however, that little could be done from exile to change the situation in Chechnya, and as time passed, their old insurgency died down. Russia felt secure enough in 2010 to abolish martial law in the region, and a sense of normalcy returned to Chechnya as its bombed-out cities were rebuilt with money from Moscow.

The war in eastern Ukraine, which broke out last spring, provided the exiled Chechens with their first chance in years to take up arms against Russia again. Munaev didn’t miss the opportunity. Weeks after Russia set off the conflict by invading and annexing the region of Crimea, Munaev arrived in Ukraine’s capital, Kiev, with his suitcase of Chechen flags and patches.

Forty-eight years old at the time, he must have seemed a strange volunteer to the Ukrainian military officers who received him. But in their desperate search for experienced fighters – Ukraine’s armed forces were hopelessly unprepared for a war with Russia – Munaev was a valuable paramilitary asset. So Ukraine’s military provided him with a cache of small arms, and he was quickly allowed to form a unit called the Dudaev Battalion, which began serving alongside the Ukrainian army last spring. (The unit was named after the late Chechen President Dzhokhar Dudaev, a former Soviet air force general who ruled Chechnya during its years of de facto independence from 1991 until 1996, when he was killed in a Russian airstrike.)

At a press conference in October, Munaev made clear his motives for coming to fight in Ukraine: “If Ukraine loses, Chechnya will lose,” he said, his voice seeming to falter with emotion. “Fighting here in the defense of Ukrainian freedom, we are defending our own freedom, our own statehood.” By that logic, he urged all Chechen exiles to take up the call to arms as a revival of their bygone war against Russia, and dozens of them have.

According to the battalion’s officers, about a quarter of their roughly 200 fighters are Chechens who have mostly come from their exiles in Turkey and various parts of Europe. Half of them are Ukrainian, while the rest are a mixed bag of former Soviet military veterans, mostly from Azerbaijan and Georgia.

Over the past year, they have participated in some of Ukraine’s fiercest battles against pro-Russian separatist forces, often doing the dangerous work of reconnaissance behind enemy lines. But Munaev’s role as their commander did not last long. In February, during a vicious battle for control of the strategic railroad juncture of Debaltseve, he was killed in action while on a reconnaissance mission with a handful of his men. His deputy commander Osmaev, a far younger and less experienced fighter from Chechnya, then took over command of the unit.

Back in their homeland, Kadyrov was elated at the news, taking it as his chance to tell all Chechens not to follow in Munaev’s footsteps. “Stop immediately!” he wrote on his Instagram account. “This is not your war. Go home now. This is your chance to stay alive.”

It seemed an ironic piece of advice for Kadyrov to offer. At least since May, dozens of his loyal fighters from Chechnya have gone to aid the pro-Russian forces in Ukraine, and he has repeatedly warned the government in Kiev that he would send more of them to arrest Ukrainian politicians or help the separatists carry the fight. He has even offered to join the war himself if Putin gives him leave.

During a visit to Chechnya in April, TIME interviewed one officer of the region’s Interior Ministry forces who says he served a brief tour in eastern Ukraine last year. Before the deployment, he says he and the other men in his unit went on leave from active duty, allowing their commanders in Russia and Chechnya to deny having sent them. “It was a formality,” he says on condition of anonymity. “That’s the way of this war.”

Though he never met a fellow Chechen on the other side of the front lines, he didn’t seem troubled by the fact that it was possible. So deep is the split within this nation that one Chechen fighter might go covertly to Ukraine from Russia, another might travel from his exile in Europe, and neither would seem bothered by the fact that, meeting on the field of battle, they would share the bonds of faith, language and kinship that have defined their identities for hundreds of years.

Driving around in his armored car in the front-line town of Lysychansk, the current commander of the Dudaev Battalion says he can’t even bring himself to call the other side Chechens anymore. “These are people who serve the historical enemy of their nation, who kill their own kin,” Osmaev tells TIME. “These aren’t Chechens. At best they’re Chechen-speaking Russians.” He doesn’t seem to care that the scorn is mutual. 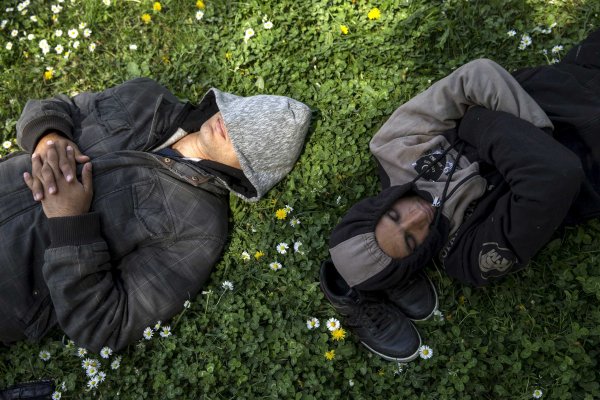 Migrants Find a Safer Route Into Europe
Next Up: Editor's Pick